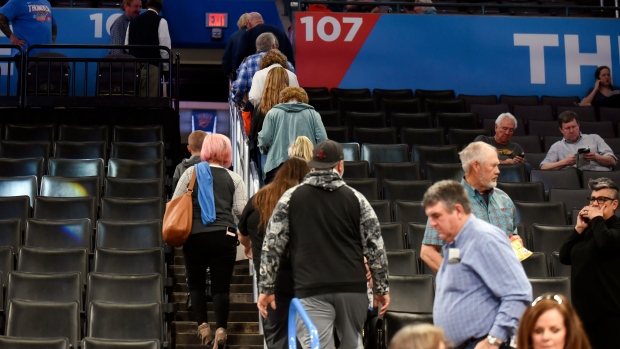 TORONTO – It’s hard to believe that just one week ago today the NBA community was debating the merits of shutting down locker rooms.

That’s where we were last Wednesday. It was still the biggest story in basketball.

With the threat of the novel coronavirus growing by the day, by the hour, by the minute and by the second, the league enacted a divisive plan to limit the risk on its players. Just a couple days earlier it had informed teams to start restricting access to the locker room, eliminating all “nonessential” personnel, including the media.

Some people thought it was an extreme measure. Some feared it wasn’t extreme enough.

In lockstep with the NHL and MLB, and based on the recommendations of infectious disease and public health experts, all 30 NBA teams were preparing to conduct their regular media availability in larger, common spaces that would allow for players to be kept at a distance of at least six feet.

The NBA knew that this was more of a stopgap than an actual solution – one that would allow them to keep players playing, balls bouncing, turnstiles turning and dollars coming in while it continued to weigh options. The league thought it had more time. A lot of people did.

The threat was very real but there was plenty of uncertainty surrounding the virus, its effects and the rate at which it would spread through North America. Perhaps the NBA didn’t act quickly enough, but it acted quicker than most and in doing so helped change the course of this past week and the direction of human history, maybe saving lives in the process.

In a meeting last Wednesday afternoon, the league and the NBA Players Association discussed potential scenarios that would allow for games to continue, even if it meant taking drastic precautions. Everything was on the table, according to reports. The most likely solution – playing games without fans in arenas, as European soccer leagues had already enacted – seemed inevitable.

League insiders expected that decision to be made by Thursday.

In Toronto, two public events hosted by members of the Raptors were scheduled for Wednesday evening. At Hotel X, just east of the team’s practice facility on the grounds of Exhibition Place, Nick Nurse launched his foundation, which helps support basketball, literacy and music programs for kids in and around the city.

Not far away at The Ballroom, Norman Powell held his annual BasketBowl event in support of Big Brother Big Sisters of Toronto. Most of the organization – players, coaches and team staff – attended one or both events. TSN had a presence at both as well.

There were only three or four reporters covering Nurse’s launch party, with just a couple of television cameras on-site. Invited guests started rolling in around 6 p.m. Powell was there before leaving for his own event, as was Serge Ibaka, Marc Gasol and a few of the younger players.

A couple hundred people gathered in the hotel’s third-level foyer for the cocktail hour. It got crowded. The developing COVID-19 crisis was the elephant in the room. It was almost impossible to have a conversation without it coming up. In practice, though, the level of immediate concern seemed low. People were still shaking hands. Most were within a foot or two of each other.

“I’m just like you guys now, just waiting and doing our part of what they tell us to do, like washing hands and all those hygiene things that we can do,” said Nurse, whose scrum followed the league’s new mandate, situating him at a safe distance from reporters. “Just kinda waiting to see what’s next. But all I can say is I fully support whatever they tell us to do. Let’s help the solution and get it taken care of as quickly as we can and all be on the same team with that.”

The evening’s festivities were to include multiple musical performances and a silent auction. For the main event, scheduled to begin at 9:30 p.m., Nurse would join the Arkells on stage for four songs, playing the guitar and piano. He had been rehearsing for weeks.

As the other acts performed in the main ballroom, the media waited for Nurse to go on from across the hall. We were in a small room, with a few team employees nearby. Every few minutes somebody would check Twitter and, each time, it seemed there would be a new distressing development.

At 6:50 p.m. ESPN’s Adrian Wojnarowski reported that the league – in consensus with owners on the Board of Governors call earlier that day – was considering taking a hiatus for an indefinite period of time. At around 8:30 p.m. we found out that the Jazz-Thunder game was mysteriously delayed, with players asked to leave the court just before tip-off. Then, at 9:15 p.m. actor Tom Hanks announced he and his wife, Rita Wilson, had tested positive for COVID-19.

More and more we all looked at each other and thought – and occasionally said – “Should we be here right now?” Even before people started to connect the dots between the now postponed Jazz game, Rudy Gobert’s still undisclosed illness and the fact that the Raptors faced Gobert in Utah a couple nights earlier, there was an uneasy feeling in the building.

At 9:27 p.m., just as Nurse was getting set to take the stage and we were about to go in and watch the show, we found out that Gobert had tested positive for COVID-19. Four minutes later, the NBA season was officially suspended.

The next few minutes are a bit of a blur. Under the circumstances, team officials asked the media to leave the building. After learning the news, several of the players in attendance rushed out. An event that felt safe just a few hours earlier suddenly seemed like an unnecessary risk. That’s how fast this was moving.

To their credit, the Raptors acted swiftly. Their entire travelling party – everybody that was in Utah earlier in the week and may have come in direct or indirect contact with Gobert and his Jazz teammate Donovan Mitchell, who also tested positive the following day – were tested for the virus and instructed to self-isolate (all the results came back negative on Friday night). Those that attended either Nurse or Powell’s event as a guest were told to practice social distancing and monitor their symptoms.

The virus should not have snuck up on anybody. It had been infecting people and killing people around the world for months. But all of a sudden, in one night, it became very real for a lot of people that hadn’t been personally affected by it.

It’s strange how that works. At that point, the coronavirus had already infected more than 118,000 people worldwide, killing nearly 4,300, but when a beloved actor or a professional athlete get it then everybody pays attention. Certainly when the NBA – a multi-million dollar business – shuts its doors, it makes a statement.

The International Tennis Federation, Major League Soccer, the NHL, MLB, NCAA, PGA and more – they all hit pause on their seasons, tournaments and competitions within 24 hours of the NBA’s announcement.

Since then, just about every sports league or event on the planet has come to a halt. On Friday, U.S. President Donald Trump declared a national emergency. In Canada, several provincial governments have issued states of emergency. Throughout North America, schools, business, places of worship and non-essential stores are being closed and people are being asked to stay at home.

For countries like China and Italy, this has been their reality for some time. For many other people around the globe, and certainly for us in North America, these past few days have rocked society to its core. It’s far bigger than sport, but sport – the NBA in particular – has had a huge impact on how we’ve come together to fight this thing.

The NBA had already begun preparing for a scenario in which one of its players tested positive. When and if it happened, the league knew it would have to put their season on hold, which is why it didn’t take long to pull the trigger. It was an obvious decision, one that absolutely needed to be made. Still, the league deserves credit for being decisive and sending that message, not just to its players, teams and other leagues who would soon have to do the same, but to the public: this is something to be taken very seriously.

As of Tuesday night, seven NBA players had tested positive for COVID-19. Five of them were asymptomatic at the time of their diagnoses, including Kevin Durant – probably the highest profile athlete to contract the disease thus far. If people didn’t know they could be a carrier and pass it on to others – including older people or those with weak immune systems – without showing symptoms themselves, they probably do now.

On the other side of the coin, Gobert became a cautionary tale for the many people that still weren't taking the virus  – or the precautionary measures put in place to flatten the curve of infection – seriously. He thought it was a joke, made a mockery of the NBA's initial attempt to contain it, and then contracted the disease himself. He owned up to his error in judgment with a heartfelt apology and generous donation to COVID-19 relief.

Between the league taking action as quickly and as meaningfully as it did, and its players – those who are infected as well as those who are not – urging people to be safe, smart and responsible and to self-isolate or at least practice social distancing, the public is far more educated about the virus than they were a week ago.

It’s been a long seven days, to be sure – a week that has felt like an eternity. It’s hit hard and it’s hit fast. Step away from the computer or the television – which we should all try to do every once in a while – and you’ll probably miss something. That’s how fast this is evolving. We don’t know where it’s going and when things will be back to normal, or what the new normal will be. We don’t know when sports will back.

What we do know is that even without slam-dunks, three-pointers, free throws, pick and rolls or crossovers, basketball has made and will continue to make an impact.