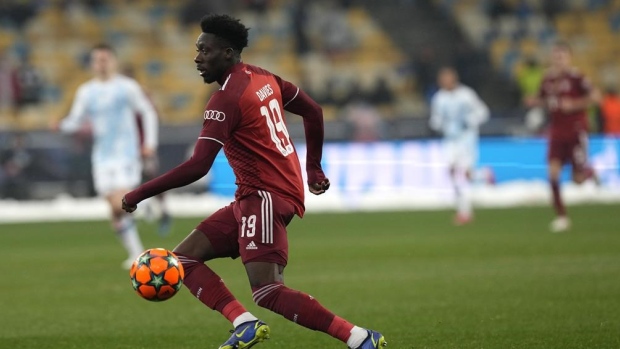 "Phonzie should be available around the second leg against Villarreal," Nagelsmann said through an interpreter, referencing the April 12 return leg of the Champions League quarterfinal.

Nagelsmann was speaking ahead of Bayern's match Saturday at SC Freiburg.

Davies recently returned to training after being sidelined since early January due to symptoms of myocarditis, a mild heart condition, following a bout of COVID.

The illness has meant that the 21-year-old from Edmonton has not played for Canada's national soccer team since a pair of World Cup qualifying wins in November in Edmonton. The Canadian men have since qualified for Qatar 2022.

Bayern said Jan. 5 that Davies had joined a lengthy list of players who had tested positive for COVID, adding the speedy fullback was well and self-isolating at home.

Davies was back training a week later, but his return was put on hold with Bayern reporting Jan. 14 that tests showed the Canadian was suffering from signs of myocarditis, an inflammation of the heart muscle. It is a mild, temporary condition in the vast majority of cases, according to experts.

Davies' myocarditis was detected in the followup examination that all players who have had COVID undergo.

This report by The Canadian Press was first published April 1, 2022