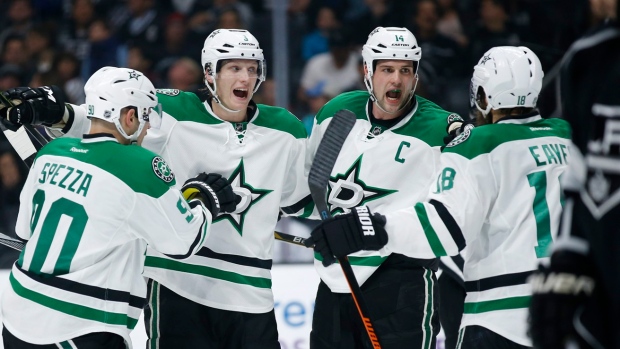 LOS ANGELES, Calif. - Jordie Benn has 55 points in his five-season career with the Dallas Stars. That's about the same number scored by his younger brother, NHL scoring champion Jamie Benn, in the last four months.

Yet when the Dallas Stars needed a big goal and a statement-making victory Saturday, the older Benn provided it.

Jordie Benn scored the tie-breaking goal with 4:58 to play, and the Stars rallied from a third-period deficit to assert their Western Conference supremacy with a 3-2 victory over the Los Angeles Kings.

After Patrick Eaves tied it early in the third, Jordie Benn got his first goal in 29 games since Dec. 21 with a long shot past a screened Jonathan Quick.

"It's huge to come back in their building in the third and get the two points that we needed to stay up on St. Louis," Eaves said. "That was huge for us."

Coach Lindy Ruff won his 700th career game as Dallas (48-22-9) moved four points ahead of St. Louis atop the Central Division and eight points ahead of Los Angeles (46-27-5) in the conference standings.

Kari Lehtonen made 24 saves for Dallas and Jamie Benn scored his 41st goal early on for the Stars, who claimed a late-season meeting of division leaders.

If this was a Western Conference finals preview, two large teams with aggressive forechecking styles set a tone with a chippy afternoon performance. With agitator Antoine Roussel in fine form, Dallas controlled long stretches of early play and rallied late for its sixth win of the season when trailing after two periods.

Jeff Carter scored his fifth goal in four games and Jonathan Quick stopped 36 shots for the Kings, who have lost five of seven.

"I hope it's not a lesson we have to learn this late in the season, but hopefully it's a better-late-than-never type of thing," Kings defenceman Rob Scuderi said. "All these games now, and in a couple of weeks, it's going to be one-goal games. Heading into the third period there (with a lead), we've got to have that one."

Tanner Pearson scored for the Kings, who lost in regulation at home for just the second time in 13 games. Los Angeles has a one-point lead atop the Pacific Division over the Anaheim Ducks, who host Dallas on Sunday.

"I think they're the highest-scoring team in the league by a long shot," Los Angeles coach Darryl Sutter said. "Don't think they are a team that anybody wants to trade chances with. At the end of the day, you can talk about parts of the game, but they are a big team and a real strong team. "

Shortly after an apparent early goal by Dallas was waved off for goaltender interference by a hard-charging Roussel, Pearson put the Kings ahead when his long shot tipped off defenceman Stephen Johns' stick and fooled Lehtonen.

Jamie Benn evened it on a power play with 2.9 seconds left in the first, scoring his fifth goal over four games and setting a new career high with his 88th point. He began the day trailing Patrick Kane by nine points in the league scoring race.

The Stars maintained a 2-to-1 shot advantage in the second period, but Carter put the Kings ahead again with his 23rd goal when the puck dribbled off his stick and crossed up Lehtonen.

NOTES: The Kings sold out Staples Center for the 200th consecutive game. ... Kings LW Kris Versteeg returned from a six-game absence with a foot injury. ... Dallas' Tyler Seguin missed his seventh straight game with a cut in his Achilles tendon. The Stars hope their point-per-game scorer will get back on the ice next week.... The Kings still won their season series with Dallas for the first time in four seasons.