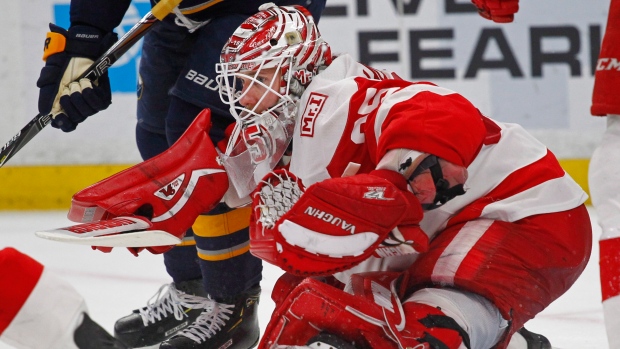 Red Wings goalie Jonathan Bernier woke up from his afternoon nap on Nov. 27 and knew something was wrong.

"Probably had some sort of flu," recalled Bernier, who was scheduled to start against the Toronto Maple Leafs that night. "The whole time when guys warmed up and were stretching and meeting, I was sleeping in the back and going to the bathroom once in a while."

Jimmy Howard​ replaced Bernier in Detroit's crease to start the game. Bernier wasn't even on the bench. The Leafs started strong scoring three goals on 14 shots and then, midway through the first period, Howard got hurt and was forced to leave the game.

"I couldn't do that to the guys," the 31-year-old explained. "At the end of the day, we have him in case of a really big emergency. I wasn't injured, so I just figured I'd go out there and give what I got."

Tyson Barrie on what Leafs were thinking during delay after Howard got hurt:

"We had heard (Bernier) he had the flu or something so we thought we might be seeing a (Scott) Foster or one of those guys come in. So, (smiles) we were getting a little excited."

The ice continued to tilt in ​favour of the highly skilled Leafs, who dominated possession and attacked in waves.

"I was just trying to survive out there," Bernier said. "I probably had 50 shots in two periods, so it was a lot of work. It took me a few days to recover from that."

For the record, Bernier faced 37 shots turning aside 34.

Where does that game rank in terms of challenging ones in his career?

"It's up there, definitely," Bernier said. "It seemed like they didn't leave the zone at all. They just kept coming and I was like, 'I need a break here.' ... The team and my teammates appreciated what I did."

Jonathan Bernier is straight up not having a good time pic.twitter.com/OlcucDLEne

Detroit's appreciation for Bernier only grew from there. He earned the starting job and posted a solid .914 save percentage over his final 31 games while playing for the worst team in the National Hockey League. And the Wings weren't just bad, they were historically awful. If Detroit doesn't play again this year, they will finish with the lowest​ points percentage (.275) in the salary cap era.

Playing in that environment is tough for any goalie, but Bernier had previous experience playing for a last-place team. During the 2015-16 season he finished with a .908 save percentage in 38 games with the Leafs. Things got so bad for Bernier that season that he was sent to the American Hockey League at one point to regain his confidence.

Bernier spoke to TSN via Zoom this week and explained how the tumultuous times in Toronto prepared him for life with the rebuilding Red Wings. The Quebec native also provided insight on top prospect Alexis Lafreniere, a summer training partner, and Dylan Larkin's leadership.

It was a tough season for the Red Wings, but you personally had a strong season. What worked for you?

"As a team, we didn't really have the season we wanted to. We're still in that rebuilding phase, but I still believed we were a better team than what we showed in the results every night. Personally, probably [coach Jeff Blashill] got confidence in me and he started to play me more and by December I was playing almost every night. So you get in a rhythm and don't have to worry about winning and losing. It makes it easier, mentally, to go out there and play your game."

Did the experience in Toronto help prepare you for this sort of environment?

"Definitely. I was still kind young in my pro career when I went to Toronto and to go through that in a market like Toronto was really, really hard. Everything I learned there, I brought that experience ... this year. For a goalie, the biggest thing is you can't worry about winning and losing when you're in that type of rebuilding year. You just got to bring out your best and make sure you're giving everything every night. Once you start losing three, four games in a row, it gets hard mentally. So I think you just got to cancel that and just worry about your own job."

What was the biggest challenge for you in Toronto?

"I'm sure a lot of guys who played in Toronto will tell you once you win one game it feels like you're the best team and once you lose one game then you're the worst team. It's a matter of staying level. I tried not to read anything about hockey so I could stay more level. That's the biggest thing, just not getting too high from what the media is saying."

The pain of finishing last is softened by the knowledge that the team will get a top prospect in the draft. There's a lot of excitement around Rimouski winger Alexis Lafreniere. What do you know about him?

"I've been, actually, training with Laffy for five or six years now, so he's been in our program for a while now. To be honest, he's been the best player for the last four or five years – even when he was a kid. You could tell he's a special player. He's a great kid who works hard and he's passionate. He's really dedicated to hockey. He's the type of kid that will change your franchise."

I spoke to Arizona's Barrett Hayton, who played with Lafreniere at the World Juniors, and he said what stands out the most is his love for the game. Did you notice that?

"He's in the gym every day and works really hard and he wants to get better. He's on the ice extra, longer than most guys and, to me, that's when you know the person really likes what he does and is passionate about hockey and wants to try and be the best he can."

From @markhmasters: #Yotes prospect Barrett Hayton explains how watching video of a young Jonathan Toews helped prepare him for life as an #NHL rookie and also relived the magical run to World Junior gold. https://t.co/WQEE0XywV8#TSNHockey pic.twitter.com/nFvpoiGHiE

Who's in the summer training group?

"I train with Antoine Roussel from Vancouver, Cedric Paquette from Tampa and we used to have some older guys that retired – [Pascal] Dupuis used to work out with us, Jean-Sebastien Giguere, [Alex] Burrows and now I'm on the older side of the guys.”

Larkin is considered by some to be a future captain for the Wings, how did he handle this tough season?

"He gets emotional sometimes during games and between periods, but that's what you want. You want guys that care about winning and that's how you get over that hump. We talk about a 'rebuild' but it's never easy. You don't want to be in an environment where you're losing and losing, because then guys feel comfortable losing. I think the biggest challenge is when you have two or three bad years and you have to find a way to start feeling what it takes to win, and I think he's the type of guy who understands that. It's a long season, but you have to put your foot down for the whole season and find a way to come out every night. He scored some big goals and is a great leader."​

There are some nice pieces on the Red Wings roster. What stands out about Anthony Mantha?

"Unfortunately he had some injuries this year and we definitely missed him. He's a big part of this team. A great scorer. I shouldn't necessarily put it this way, but he's kind of like [Alex] Ovechkin where he's got his spot with the one-timer on the power play. When Filip Zadina came up, it felt like we had two good power-play [units] because those were two good shooters and all you have to do is find a guy to feed those guys. Tremendous player. He's got the size, he's got everything."

How about Tyler Bertuzzi?

"He fulfilled his line. You've got [Mantha] who is a really good sniper, you got Larks who has great speed and skill and then Bert goes into the corners and does everything well. Every night he shows up. He's a really hard player to play against."

Last year you became a licensed helicopter pilot. Why is that something you were so interested in?

"I always had a passion for flying. I was going to get my plane license first, because usually that's what people do, because it doesn't cost as much, and you can get the feel of flying. One of my friends had a float plane at our cottage, so I went up with him and the next day I went to try a helicopter and I just fell in love with it. You can slow down and see things the way you want, and I like the challenge as well. It's definitely much harder than flying a plane, so it's a cool challenge to have."

"The takeoff and landing are the most dangerous times, so you need to have the skill to do it. It's actually pretty hard to control the three controls at the same time and be able to stabilize it and talk to control and things like that. But the main thing for me is what you can do with a helicopter compared with a plane."

Does flying help clear your head?

"We have a busy schedule in the season, but I find when things are not going well, I can take an hour or two and go and fly and it takes your mind away from hockey and from the things that you're not happy about. I like when I'm up there. You're seeing the view and it's pretty special."

Where's your favourite place to fly in the Detroit area?

"We actually went to Traverse City once and that's by the water. There's water everywhere here so it's pretty amazing, the view, and I've taken my family and looked at downtown Detroit. But, really, where I fly the most is back home at my cottage."

It's possible, if the season resumes, that some non-playoff teams will not return to finish their season. That would mean you don't play for nine or 10 months. What would that be like?

"I find it hard to believe that some teams will be playing to September and some teams will be off from March to probably December. To me, it doesn't seem fair, but I think you got to find a way to generate revenue for the league and for the players and if that's the only way we can do it then that's the way we got to do it. It's going to be tough. It's going to be a really challenging summer, completely different than what we do usually. I'll probably end up coming back here [Detroit] in late August for my son's school and hopefully there will be a lot of guys here and we can all skate together and maybe hire a goalie coach and coach so we can run real practices instead of going through the motions. We'll have to pick up the pace at some point without playing games, which is going to be pretty tough.”