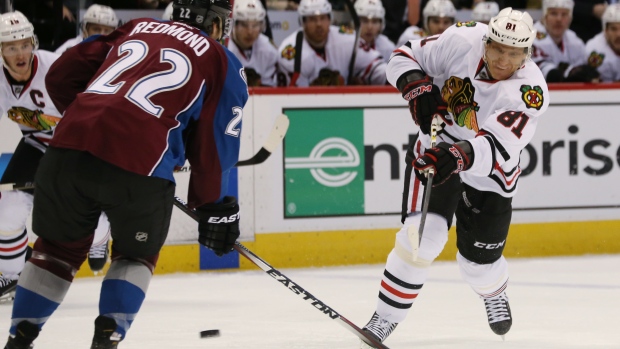 DENVER - A dominant performance by the Chicago Blackhawks was nearly spoiled by Colorado's rookie goalie.

Corey Crawford made 27 saves, and Jonathan Toews and Andrew Shaw also scored for the Blackhawks. Patrick Kane had three assists.

The Blackhawks won at Pepsi Center for the first time in two seasons. Last season they played well in Denver only to fall short against the young Avalanche.

"What a hockey game that was. Anybody's hockey game," Chicago coach Joel Quenneville said. "Very comparable to what happened here last year. We got a lot of chances, got a lot of sniffs around the net and came out on the wrong side. Today it was nice to come out ahead."

Pickard, making his first start after winning two games in relief of Reto Berra, kept the Avalanche in the game with a career-high 42 saves. He left for an extra skater with 2:15 remaining, but Colorado couldn't tie it.

Ryan O'Reilly and Max Talbot scored for the Avalanche, who had won two consecutive games.

"I should have had a lot more," O'Reilly said. "The goal was definitely nice, but I still need to keep working harder and do a lot more things better."

Colorado tied it 2-all on O'Reilly's third goal of the season at 3:36 of the third. Chicago stepped up the pressure but Pickard kept it a tie game until Bickell's go-ahead goal at 14:43 on a pass from Kane.

"Duncan (Keith) threw kind of a half-decent pass to Kane and he picked it up," Bickell said. "I don't know how he was handling it when it was bouncing, but he made a play and got the puck to the net."

Until then it appeared Pickard might steal a win for Colorado. He kept the Blackhawks off the board in the first period and made four of his 13 saves in the first 20 minutes on Marian Hossa, who had several chances.

Pickard has established himself as the starter until Semyon Varlamov returns from a groin injury that has sidelined him the last four games.

"It's good for me playing games in the NHL," Pickard said. "You get to feel more comfortable each one that goes by."

Pickard's strong play continued into the second. Chicago went on the power play early in the period and put a lot of pressure on Pickard but couldn't beat him.

The Avalanche capitalized when Talbot scored less than two minutes later to give Colorado a 1-0 lead. It was Talbot's second of the season.

The Blackhawks finally broke through when Brent Seabrook's shot from the point trickled through Pickard's legs and Toews knocked it into an empty net to tie it.

It was Toews' 10th goal of the season.

That ended Pickard's scoreless streak at 149 minutes, 24 seconds. Less than three minutes later, Shaw made it 2-1 on another power play when he beat Pickard with a one-timer from the left circle. It was his fourth of the season.

"I thought Pickard was outstanding out there," Avalanche coach Patrick Roy said. "He had some great saves for us. He was good on the (penalty kill). He was our best player. Unfortunately they scored on nice goals, (but) they had to work hard for those goals. It's what you ask for your goalie."

NOTES: Chicago was 2 for 6 on the power play. ... Avalanche D Erik Johnson was scratched with a head injury sustained in Tuesday's win at Arizona. Karl Stollery was recalled from Lake Erie of the AHL and played in his place. ... Shaw returned to the lineup after missing three games with an upper-body injury. ... Colorado LW Alex Tanguay was back in the lineup after missing two games with a facial fracture.