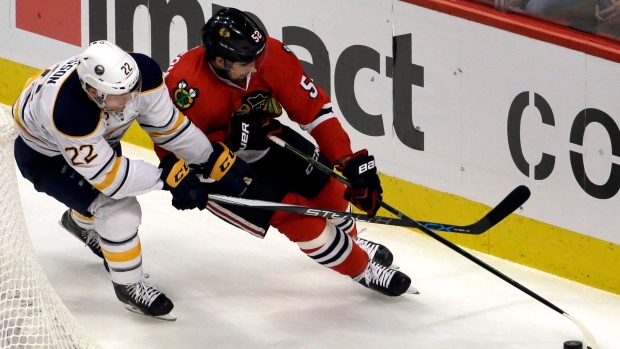 The Chicago Blackhawks announced new deals for a pair of players on Tuesday.

The club signed defenceman Erik Gustafsson to a two-year extension, while forward Tyler Sikura has inked a one-year pact.

TSN Hockey Insider Pierre LeBrun reports Gustafsson's deal pays him $1 million in its first year and $1.4 million in its second, while Sikura's deal comes in at $650,000.

Gustafsson, 25, is in his second season with the club. A native of Nynashamn, Sweden, Gustafsson has appeared in 19 contests with the club, scoring once and adding four helpers.

Originally taken in the fourth round of the 2012 NHL Entry Draft by the Edmonton Oilers, Gustafsson has 60 career games under his belt and played in five playoff games for the team in the spring of 2016.

Sikura, also 25, has yet to make his NHL debut.

A native of Aurora, Ont., Sikura was undrafted out of Dartmouth and is now in his fourth pro season. In 57 games with the American Hockey League's Rockford IceHogs, Sikura has 16 goals and nine assists.