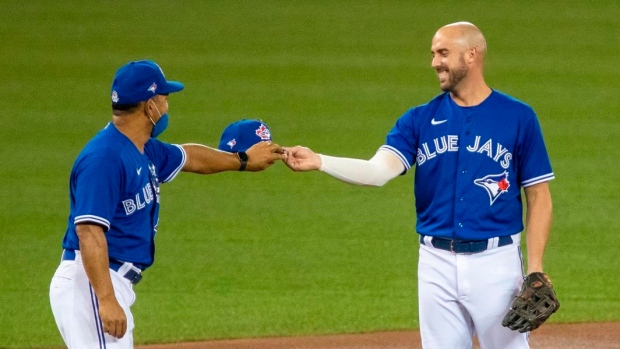 TORONTO — Travis Shaw regrets speaking out in the way he did, but also admits he didn’t know what he and his Blue Jays teammates could be facing this summer when they arrived for summer camp a week ago.

On Friday, the first-year Blue Jays infielder sent out a series of tweets in response to my report on the severe penalties the team was warned about, focusing on the theme that there’s no way the Rogers Centre-Marriott City Centre Hotel quarantine bubble can be their reality all summer if the club is granted permission by the federal government and health authorities to play their 30 regular season games in Toronto.

“All summer isn’t going to happen. Not an option,” the 30-year-old infielder tweeted.

As we reported Friday, Shaw had no idea the quarantine bubble could extend into the regular season if the mandatory 14-day quarantine period is still in place and the Canada-U.S. border remains closed for non-essential travel.

Management decided to finally outline the potential scenarios to the team Saturday.

“We actually had a sitdown meeting,” Shaw said Sunday evening, addressing the topic for the first time on a Zoom call with reporters during the team’s workout. “They met with groups of people in the locker-room. I’m definitely a little bit more informed now than I was, say, a week ago. I kind of know what the deal is going forward. I know they’re still working with the government to get clearance for the regular season. Coming up here, I don’t think anybody thought that we could possibly be in here for three months, but everything’s kind of happening on the fly right now and we’re going to have to adjust accordingly.”

Now, Shaw and his teammates are well aware of just how unique, unenviable and challenging their situation could be, not only for summer camp over the next nine days until they leave for Boston to play a pair of recently-added exhibition games against the Red Sox, but far beyond that.

“It was kind of the first that I was hearing about it that we could possibly be in here all summer,” Shaw said of his initial Twitter response. “It’s not ideal to live in a hotel room for three months. I don’t think anybody would want to be stuck in a hotel room for three months. I like to go on walks, get away from work. Nice days like today in Toronto would be nice to walk by the water but we can’t do that this year and the Canadian government has made that pretty strict and we’re going to have to follow that and I, personally, will follow that.”

The Twitter fight Shaw found himself immersed in with fans and those protecting public health was something he regrets.

“When we came up here we thought it was only going to be two weeks. We weren’t aware it could possibly be the entire summer.”

The team was told they could face a $750,000 fine and potentially jail time, the maximum penalty in the federal Quarantine Act, if seen outside the stadium walls.

It’s something they’ve all been taking seriously.

They just didn’t know it could be all summer.

“According to our rule sheet it just said $750,000 fine,” Shaw said. “And that is something I’m not going to break, I can promise you that.”

Shaw says the team hasn’t sat down to discuss how they’ll behave on the road when they start travelling to the States next week.

Whether the Jays stay in Toronto this summer, head back to virus-ravaged Dunedin, or find a way to make Sahlen Field in Buffalo work, the MLB clubs that take it upon themselves to self-isolate and stay healthy will have the best chance on the field in 2020.

“We have not discussed that yet,” Shaw said. “I think everybody has to be smart. I can’t sit here and say 100 per cent that everybody is going to stay in their hotel room on the road, either. I think people just have to be smart about it. I do not think people will go out and be selfish and jeopardize our team health and public health.

During the discussion with management Saturday, it was conveyed to players that the club is still sorting through possibilities, but that Toronto is still without a doubt the preference.

“Unfortunately there’s not a lot of options to play somewhere else,” said Shaw, who added he won’t be opting out of this season like some players, even if he has to stay in a hotel room all summer. “The options are very limited. I don’t think anybody wants to play in Dunedin. That could be a competitive disadvantage just because of the heat, the weather and COVID outbreak that’s going on in Florida right now. Options are pretty limited right now.”

The Jays’ rotation depth is already being tested a bit, as manager Charlie Montoyo announced Sunday that off-season trade acquisition Chase Anderson suffered a strained oblique and will miss some time.

Montoyo described it as a day-to-day situation, but oblique injuries and pitchers usually don’t mix well.

“He did it getting loose for a bullpen a couple days ago,” Montoyo said.

Slated for a mid-rotation slot, likely No. 4, that will bump Trent Thornton up a rung for the time being and give a host of other candidates a new lease on life.

After looking good in a simulated game on Saturday, lefty Ryan Borucki could be the front-runner, with Nate Pearson and his service time considerations looming after spending at least a week off the roster to begin the season in order to secure another year of team control.

Shut down in February with elbow tightness and toting around a long history of left arm issues, Borucki feels as healthy as he has in a while, adding he’s already built up to 50 pitches in bullpen sessions.

Borucki has tweaked his repertoire, too, ditching his slider in favour of a cutter, to go along with his fastball-changeup bread and butter.

“I just think the cutter, with the movement that I have on my fastball, really works well off my fastball,” he said. “I work inside to hitters really well and running it back in on them, then I can just throw the cutter right off that same lane and try to jam guys. I feel like it’s a better pitch than that bigger slider for me.”

Hyun-Jin Ryu, who will pitch Monday in an intra-squad game, Matt Shoemaker and Tanner Roark are locked into the first three rotation spots.

Not that he needed anymore confidence after dominating each and every one of his spring training outings, Nate Pearson can puff out his chest even more after carving through the top of the Blue Jays’ order Saturday.

“That’s like our ‘A’ lineup and I’ll be facing a lot of ‘A’ lineups once I get my call to the big leagues, and it kind of just showed what my stuff measures up to and I thought I did pretty well,” Pearson said.

Getting ready in this setting has added new wrinkles for everyone, but Pearson was able to get himself mentally ready to stand on a big-league mound.

“I thought it was going to be a little bit different but I was able to pick up the exact adrenaline that I would have in a regular game,” Pearson said of the simulation game setting. “I haven’t been able to pitch in the Rogers Centre a lot so my first time being here as a guy that’s trying to break into the major leagues, it was awesome for me to be out there and I got a lot of adrenaline from it so I didn’t feel like I missed any parts of the environment.”

While the Jays continue to essentially “no comment” every question about a missing player or how many are still training in Dunedin, it’s been pretty clear the one key cog that’s missing is starting left fielder Lourdes Gurriel Jr.

No update has been given on the 26-year-old, nor has he been placed on the injured list like Brandon Drury, Jonathan Davis, Elvis Luciano and Hector Perez were a couple weeks ago.

Those five players have still not been spotted in Toronto.

Meanwhile, Austin Martin is now officially in the Jays’ 60-man player pool, but no ETA has been given for the fifth-overall pick.

Martin, like everyone else, would need to go through two COVID-19 tests in Dunedin before he can fly to Toronto to join workouts.