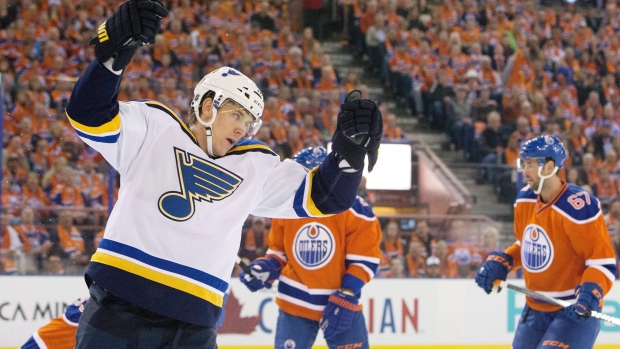 EDMONTON - It's beginning to look like deja vu all over again for Edmonton fans.

Alexander Steen, Paul Stastny and Jori Lehtera each recorded a goal and an assist as the St. Louis Blues spoiled the Oilers' home-opener with a 4-2 victory over Edmonton on Thursday.

The Oilers, who have missed the playoffs the last nine seasons, spending the majority of that time at or near the bottom of the standings, are now 0-4 to start the 2015-2016 season.

"I think the whole fan base is impatient right now and we are feeling that right now," said Oilers forward Taylor Hall. "We don't want to be down 0-4 to start the year. That's probably the worst-case scenario. When you looked at it mid-summer, this is probably the worst you could have imagined. We have to find a way."

"We have a little bit of a roller coaster thing going on right now where we get a little bit of momentum and then the other team will come back and score and we sag a bit," he said. "Emotionally, we are up and down quite a bit and that comes from not winning."

Vladimir Tarasenko also scored for the Blues (3-1-0) who have won their last eight games against Edmonton.

"The game in the first period was up for grabs, Edmonton was probably a bit more energized, but halfway through the second period we started to get on the grind and took it over," said Blues coach Ken Hitchcock. "We did a good job at the end of the second period and a great job the whole third period."

Lauri Korpikoski and Hall scored for the Oilers. First overall draft pick Connor McDavid played his first regular-season game in Edmonton, but was held without a point.

It didn't take the Oilers long to get on the board, scoring on the game's first shot as a fortunate bounce off the boards came out front to Korpikoski and he buried it past Blues starter Brian Elliott just 1:36 into the game.

However, St. Louis bounced back a minute-and-a-half later as a Troy Brouwer shot caromed off the post to Lehtera, who beat Edmonton goalie Cam Talbot.

The Blues took a 2-1 lead with four minutes to play in the second period as a face-off win in the Edmonton zone came back to Tarasenko, who blasted in his third of the season.

St. Louis went up by a pair four minutes into the third with a power-play goal as Steen sent a shot in front that deflected off Stastny and in.

Two minutes later, the Oilers got back into the game on a great individual effort by Hall, who battled for a puck in front before lifting a backhand shot into the net.

The Blues put the game away with two minutes left though as Steen blasted a one-timer past Talbot for his second of the season.

The Blues play the fourth game of a season-high six-game road swing in Vancouver on Friday. The Oilers head back out on the road to play the Flames in Calgary on Saturday.

Notes: The last time Edmonton defeated St. Louis was a 3-0 shutout in March of 2013. … Blues rookie Robby Fabbri was out with a concussion. Also absent for the Blues was defenceman Kevin Shattenkirk (lower body). … The Oilers remained without winger Jordan Eberle (shoulder). … It was the final home opener at Rexall Place, as the Oilers will move into their new rink to start next season.