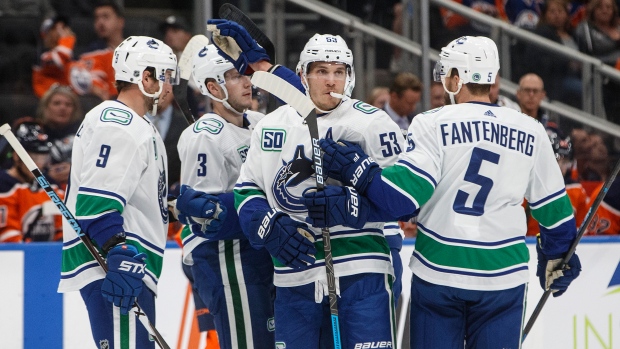 EDMONTON — Sven Baertschi looks like he has fully recovered from concussion issues that kept him to just 26 games with the Vancouver Canucks last season.

Bo Horvat had a goal and set up a Baertschi goal as the Canucks came away with a 6-1 pre-season victory over the Edmonton Oilers on Thursday.

"I've been feeling great all camp," Baertschi said. "I thought I was skating well all night and had my feet going. I'm starting to make my reads out there and understanding what is happening."

The 26-year-old from Switzerland thinks playing with Horvat certainly helps.

"He is such a complete player," Baertschi said. "He's got the speed, he's got the skill. He's got the play-making abilities. He is very strong."

Brogan Rafferty, Jay Beagle, Lukas Jasek and Adam Gaudette also scored for the Canucks who improved to 3-1 in exhibition action.

"I felt pretty good," said Markstrom. "It's fun to be out there playing a real game. It's fun. This is what we grind all summer for. The guys made it easy for me, we played a pretty good road game."

Cooper Marody responded for the Oilers, who are 1-2.

"You learn a lot about people in games like that," said Oilers head coach Dave Tippett. "Tonight was a big evaluation game for a lot of guys. We'll see where it washes out.

"If you want to make the NHL, there are no excuses."

Rafferty opened scoring for Vancouver four minutes into the opening period when he teed up a blast from the point that blew past Oilers goalie Mikko Koskinen.

Edmonton responded a couple of minutes later as Marody backhanded in a puck that was lying in the crease, surprising Markstrom, who thought he had it under his pads.

A giveaway at Vancouver's blue-line led to Beagle beating Koskinen high and to the glove side as the Canucks regained the lead with 86 seconds left in the first period.

Vancouver went up 3-1 on the power play 12 minutes into the second period as Horvat made a terrific pass through the seam to give Baertschi an easy redirect into the net.

Jasek's wrist shot from the top of the right circle came on a power play nearly four minutes later.

Shane Starrett replaced Koskinen in the Edmonton net to start the third and was beat early on as Horvat scored on a breakaway.

Gaudette was left alone in front of the net with four minutes remaining to record the Canucks' sixth goal.

The Oilers remain home to host the Calgary Flames on Friday, while the Canucks head to Salt Lake City to face the Los Angeles Kings on Saturday.

Notes: Vancouver won the previous pre-season meeting between the two teams 4-2 on Tuesday… The Oilers and Canucks open up the regular season against each other in Edmonton on Oct. 2… Both teams made slight trims to their training camp rosters as Vancouver sent Vincent Arseneau, Michael DiPietro and Jonah Gadjovich to the Utica Comets, while the Oilers assigned goaltender Stuart Skinner to the Bakersfield Condors… Free agent signing and veteran goaltender Mike Smith, who played for the Calgary Flames last season, has yet to participate in Oilers camp or play a pre-season game in net due to an illness.