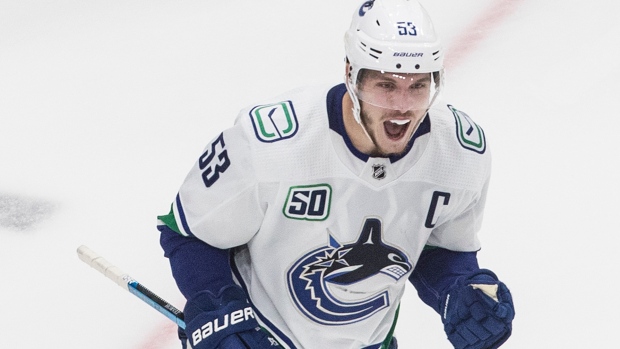 No NHL player is enjoying life in the bubble more than Vancouver Canucks forward Bo Horvat.

The Canucks centre has made the most of Vancouver’s captivating playoff run, scoring eight goals in 12 games while looking like one of the league’s most dangerous forwards whenever he is on the ice. With the level of competition having significantly jumped in the second round against the Vegas Golden Knights, Horvat’s offensive explosion has been a blessing for head coach Travis Green.

It’s not as if Horvat’s scoring has come out of thin air – he’s been a reliable top-six forward since entering the league back in 2014-15, and has put together four consecutive 20-goal seasons on a rebuilding Vancouver team. Horvat’s development, plus an influx of more capable players around him (ahem, Elias Pettersson and Quinn Hughes), has allowed him to take the next step in the offensive zone.

A lot of Horvat’s success this postseason has to do with three components – the pace and space he’s creating for himself, the passing lanes his teammates are creating for him to set up a high volume of scoring chances, and his new position in the Canucks’ lineup.

Let’s work in reverse order on those items. As Horvat’s progressed through his career, so too has the quality of the teammates around him. Five years ago, he spent most of his minutes chasing the puck with Jannik Hansen and Derek Dorsett.

It’s a different story these days at even strength – Horvat routinely sits in the Vancouver top six, and this postseason has played most of his minutes with Tanner Pearson and Loui Eriksson up top, backed by both of Vancouver’s higher-quality defensive pairings: 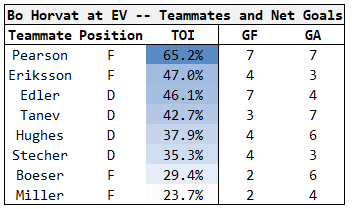 It is an interesting collection of talent. While there are some limitations, as a unit they do a solid job of trying to drive the puck into more dangerous areas of the offensive zone. Horvat, in particular, is outstanding at this – whether he’s carrying the puck or creating shooting space with sound positioning and off-puck play, the Canucks know he’s most dangerous working in the slot between the circles.

It’s that same core competency that has made Horvat an elite power-play weapon, and it’s why he is a fixture on Vancouver’s lethal first unit. Up a man, Horvat generally has two roles – acting as the bumper in the high slot or working his way down low, playing the role of screener and rebound collector. With the puck on his stick, Horvat’s role out of the slot is setup man. With the puck off his stick, he’s creating chaos.

Just look at how effective he’s been at doing that in these playoffs. He’s already managed 54 shot attempts in 12 games, and though his shooting percentage is unsustainably through the roof (25 per cent), his scoring is quite meritorious. In fact, only two forwards – Boston’s Brad Marchand, and Colorado’s Nazem Kadri – have tallied more expected goals than Horvat this postseason. In large part, that’s because Horvat is shooting from where goaltenders get burned, over and over again (via EH): 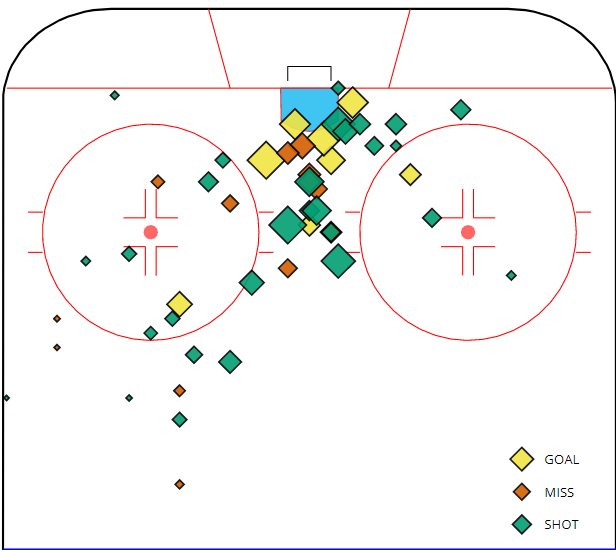 That is an outstanding number of shots from the low slot. To show just how emphatically different it can be, even with players generating similar shot volumes, consider what it looks like for Philadelphia’s Claude Giroux this postseason – another very talented forward, but one who has been forced much more to the perimeter and remains goalless: 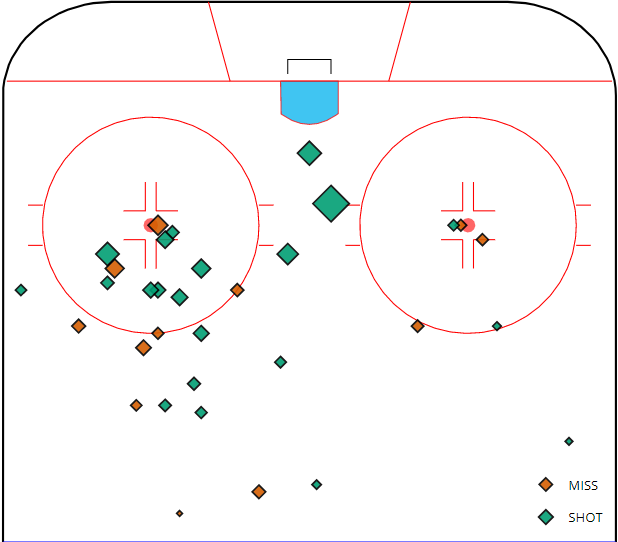 Horvat has always been a reliable player for this team, but his value as a weapon on the team’s second line and on the first power-play unit is pronounced with the progress of the rest of Vancouver’s core. He is the exact type of scoring redundancy and depth you need to advance in the playoffs and, perhaps, pull off upsets against superior competition.