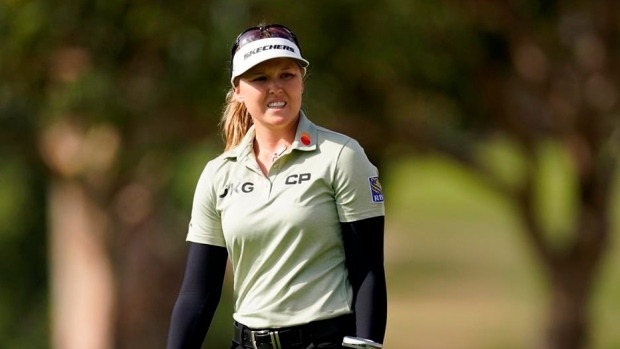 A fast start and big finish added up to a solid start for Brooke Henderson in the first round of the Amundi Evian Championship.

Henderson drained a 20-foot putt on her second hole of the day, then concluded matters with consecutive birdies on her 17th and 18th holes to end up at 2-under par.

“It was nice to get started on the day with a birdie,” said Henderson, “even though I gave it back on the next hole. It was still nice to get under par early.”

It marked just the third time in her past 12 major starts that Henderson has opened with a round in the 60s.

“I wanted to get off to a faster start, have a good day today,” she said, “and I felt like I accomplished that, which I’m really happy about. I’m excited for the next three days.”

Henderson, who leads the LPGA Tour in hitting greens in regulation with a lofty mark of 78.3 per cent, only found 13 of the putting surfaces in Round 1. But she needed just 30 putts to get around the Evian Resort Golf Club, which she said gave her confidence with the club that can run hot and cold depending on the week.

“Hopefully I can hit a few more greens tomorrow and give myself some good lucks, hopefully roll in a few more birdies.”

The 23-year-old said her familiarity with the course, which has hosted the women’s major for 27 years, allowed her to feel comfortable in her course strategy, despite the fact the even wasn’t held last year. The layout is notable for its severe slopes and rolls, something players try to manage, including the Canadian star.

“I felt like we just need to do a little better job of adapting to the release on the course,” said Henderson. “I think if it rains this weekend then it won’t be releasing as much, but maybe tomorrow in the afternoon might have to account for a little bit more.”

The Smiths Falls, Ont., product had her score matched by the other Canadian in the field, Alena Sharp, who recorded four birdies and a pair of bogeys on her day.

Sharp and Henderson will represent Canada at the Olympics in two weeks.