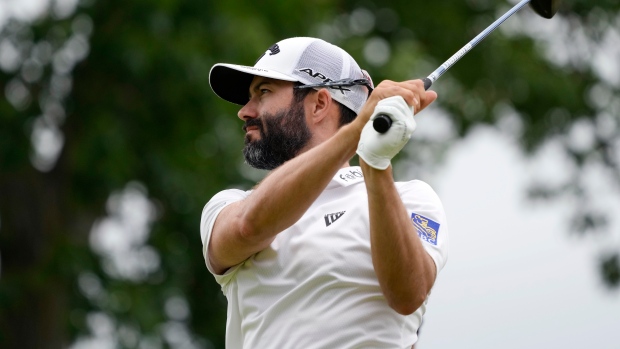 While he wasn’t able to keep the lead he established after the opening round, Adam Hadwin continued his fine play at the U.S. Open, posting a two-over 72 on Friday.

It was a round that could have slipped away from him after a bumpy start, but one in which he held on, punctuating things with a birdie-birdie finish.

“I was just a little bit off today,” said Hadwin, who battled through gusting winds. “I just didn’t strike it as solid as I did yesterday.”

Starting on the back nine, the Canadian made bogeys on three of his first seven holes and was in danger of falling off the pace.

The first came on a three putt on the short par-3 11th. It was followed by a tee shot on 12 that ended up deep in the rough and required a hack back to the fairway.

On the par-3 16th, his tee shot was close to perfect but came up a foot short. Rather than rolling down to the hole, it stopped in front of the green. Three shots later, he’d logged a bogey.

Another bogey on his 11th hole, the second, came when he missed the green and failed to get it up and down.

But on the par-5 eighth, he reached the green in two and used two putts to get his first birdie of the day. He dropped a 13-foot putt for another birdie on the par-4 ninth, ending his day at two under for the tournament.

The comeback was a testament to the swing changes Hadwin has made over the past 18 months. Unhappy with his iron play, he elected to do an overhaul on his game and began working with Mark Blackburn. The improvements took time to knit together and there were times when Hadwin wondered if he’d made a mistake, admitting that there were times he was in some dark places.

But his play since his tie for ninth at the Players in March has shown signs of consistency and reliability. He was 10th in Strokes Gained: Total after his round, a clear sign that all parts of his game are working well.

“It’s the U.S. Open,” he stated. “I knew some struggles were going to happen at some point. It wasn’t going to be a breezy 66 every day. But I did a really good job of battling through, putting the ball in play, giving myself a chance.”

The biggest improvement seen this week might not be with his clubs but with his mind. Once known for his short temper, Hadwin has remained calm through the highs and lows of the first 36 holes, rolling with the breaks both good and bad.

“I definitely sensed myself getting a little bit frustrated there on the front nine,” Hadwin admitted. “You just have to keep grinding it out. You know that the lead is not getting too far in front of you at a U.S. Open. Every shot matters, and I’ll give myself some more chances this weekend.”

He also made smart choices with his shot selection. On the fifth hole, a 305-yard, uphill driveable par 4, he laid back in the fairway rather than risk ending up in one of the deep greenside bunkers.

“I thought that was my best opportunity to make a birdie there,” he said. “It was one of those days where I could see where the round was going. I didn’t really have anything going. I could just see trying to be too aggressive, ending up in a tough spot and ending up making a five and really throwing things away.”

As opposed to the car wash of interviews he needed to do after his round on Thursday when he was leading, Hadwin only chatted with the small group of Canadian reporters on site on Friday. And that seemed just fine with him. Thursday night was a restless one after being the leader in a major for the first time in his career.

“I didn’t get as much sleep last night as I would have wanted last night,” he stated. “It was a later night and a little bit difficult to come down from the high of yesterday’s round.”

The weekend is expected to be a challenge, with the winds continuing to make club selection difficult. A storm expected on Friday missed the golf course, meaning the fairways and greens are also firming up, like they always seem to do at the U.S. Open.

“It’s too difficult of a golf course and a setup and a championship to change anything,” Hadwin stated. “I’ll just try my best on every shot, whatever that may be and go from there.”