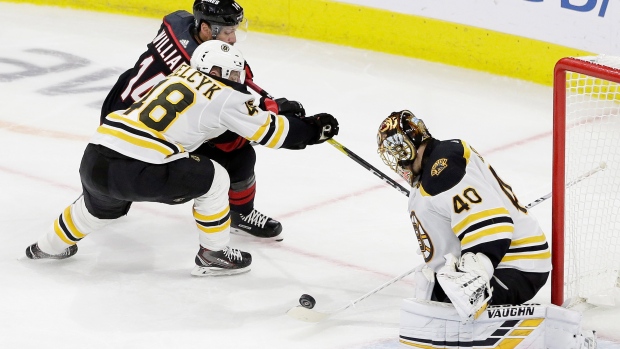 Tuukka Rask makes a save during Game 3 Tuesday. , The Canadian Press

RALEIGH, N.C. — Tuukka Rask is stopping just about any puck playoff opponents can shoot his way — even the ones he doesn't see.

The goaltender has been dominant in the Boston Bruins' six-game post-season winning streak that has them on the doorstep of the Stanley Cup Final. Just don't expect him to make any grand declaration of being "in the zone" as he makes stop after stop in these playoffs.

He's confident and comfortable. Leave it at that.

"I've felt good for many, many months," Rask said. "It's just the way when you're seeing the puck, when you feel comfortable. It's about timing and patience and all that. I think experience helps that. ... The way I usually want to play, I want to play calm and make myself look big and maybe even tough chances, try to make it look easy kind of.

"So if that's in the zone, then so be it. But I just try to be focused and give us a chance."

That's exactly what Rask has been doing, too, in helping the Bruins to a 3-0 lead on the Carolina Hurricanes in the Eastern Conference final. Boston goes for the sweep Thursday night in Raleigh.

The 32-year-old Finnish netminder has stopped 85 of 90 shots in the first three games of the series with the Hurricanes, who have just been unable to solve Rask even when getting a handful of open-net chances. He's allowed nine goals amid 205 shots in the six-game streak, good for a .956 save percentage and a 1.5 goals-against average.

Overall, he's second in the playoffs for save percentage (.939) and goals-against average (1.96) while posting a playoff-best 11 victories in 16 games.

"He looks super calm right now," said Carolina defenceman Dougie Hamilton, who spent three seasons as Rask's teammate with the Bruins. "We have to do a better job of getting in his face and making it harder on him. I mean, if he's going to see it, he's going to stop it, so we've got to get some sloppy stuff around the net."

Yet it didn't matter what the Hurricanes did Tuesday night in an all-out attack on Rask to start the game. They couldn't zip or slip one by him.

Rask stopped 20 first-period shots — 20! — and ensured the Bruins went into the first intermission in a scoreless game despite the Hurricanes carrying play in front of a rowdy crowd that had helped Carolina go 5-0 at home in the post-season to that point.

That included one sequence roughly three minutes in when Rask stopped Nino Niederreiter's tip, Micheal Ferland's putback at the crease and Justin Williams' follow-up try despite Rask losing his stick. There was another Williams rebound that wasn't officially counted as a shot on goal,, too. It was a harrowing few seconds for Boston coach Bruce Cassidy, who quipped: "I might have had my eyes closed for three of them."

"He's been dialled in" since the start of the playoffs, Cassidy said. "He's been excellent. He really hasn't had a poor night. He's had a couple that were, I'd say, above average and the rest have been very good. Tonight the first period was excellent."

That gave the Bruins a chance to regroup, then come out and score twice in the second period to take control.

Sure, Rask caught a break when Carolina's Teuvo Teravainen missed a wide-open net in the opening minute when the goalie fell trying to slide across the crease. And Rask said there were shots that he never spotted until the puck hit him.

"There's a couple of chances I didn't see in the first period," he said. "A lot of times, if you don't see it and don't move, you're going to have a better shot at saving it than if you would move too much."

Then again, when a goaltender is playing as well as Rask is, sometimes he makes his own luck.

"He's always given us a chance to win," Bruins centre Patrice Bergeron said. "That being said, right now he's definitely in the zone and doing some amazing stuff."

NOTES: Cassidy said fourth-line winger Chris Wagner has returned to Boston for further testing and will not play in Game 4. Wagner, who scored the Bruins' first goal in Game 3, hurt his right arm while blocking a shot late in the third period. ... Carolina coach Rod Brind'Amour said Curtis McElhinney would "probably" make his second straight start in goal. Petr Mrazek started the Hurricanes' first nine playoff games but allowed 10 goals in the first two games of this series.