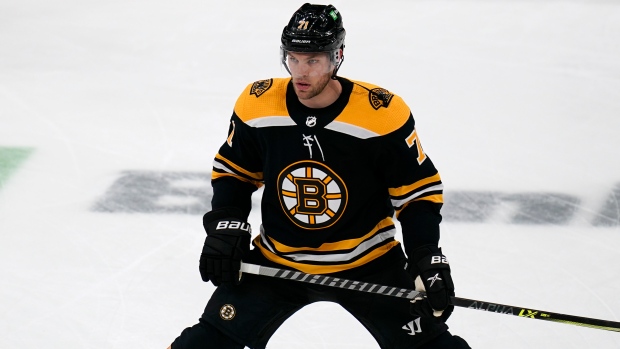 Boston Bruins winger Taylor Hall said Friday he will prioritize fit with a team over money as he hits unrestricted free agency for the second straight year this summer.

Hall, who joined the Buffalo Sabres last off-season on a one-year, $8 million deal, was traded to the Bruins at the trade deadline and found immediate success. After scoring two goals and posting 19 points in 37 games with the Sabres, Hall had eight goals and 14 points in 16 games upon joining the Bruins. He added three goals and five points in 11 playoff games.

"I'm not looking to absolutely maximize my value at this point. It's about being a good fit rather than money or a long-term thing," Hall said. "I just want to find a good home for the next few years."

Taylor Hall: "I'm not looking to absolutely maximize my value at this point. It's about being a good fit rather than money or a long term thing. I just want to find a good home for the next few years"

The 29-year-old reached the playoffs for just the third time in his 11-year NHL career this season.

Hall, who won the Hart Trophy in 2018 with the Devils, has played for four teams over the past six seasons, splitting time last season between the New Jersey Devils and Arizona Coyotes. He gave an honest assessment of his time with the Sabres last month.

“There were some really dark days this year in Buffalo,” Hall said in May. “I haven’t really talked a lot about it but I didn’t play well. I don’t have anyone else to blame for that, for my play in Buffalo. For myself, it just didn’t work out. I came in prepared, I worked hard and for whatever reason, we just didn’t have it. We had a great group of guys; the chemistry in the locker room was great.

"When it was time to perform in the game, I didn’t do my job and I’m sure a lot of guys would say the same thing.”

Hall has 228 goals and 596 points in 680 career games since being selected first overall by the Edmonton Oilers in the 2010 NHL Draft.