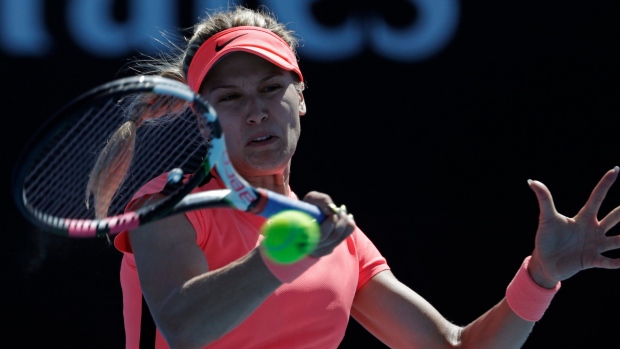 Eugenie Bouchard was eliminated from the Australian Open on Thursday with a straight-sets loss to World No. 1 Simona Halep.

Bouchard was defeated 6-2, 6-2 in one hour and five minutes by Halep, who rolled her ankle in her first-round match.

Bouchard, who has fallen from No. 5 in the rankings in 2014 to No. 112 entering the Melbourne Grand Slam, held serve just once against Halep but managed to hit 15 winners to Halep’s 16 in the match.

The 23-year-old said she feels confident her game is improving.

“My shots feel good, I was little bit too inconsistent,” Bouchard said after the match. “I would like to work on my movement and fitness a little bit more, but I feel like I’ve made a lot of progress recently. I feel like I started, really, from a lower point in my tennis, so I feel like I’m closer to where I want to be. But it still takes a lot of work.”

Bouchard entered the Australian Open coming off five straight first-round exits dating back to the US Open in August. She won a total of just 13 matches across 21 tournaments, suffering 14 first-round exits.

“I came down to Australia knowing I wasn’t fully ready and was maybe not going to even come down here, so I’m happy I did,” Bouchard said. “Winning one match was a victory for me and feeling better on the court and seeing the improvements just from the beginning of the year [at the] Hopman Cup to now. I already feel lots of improvement and that’s the most important thing. If I can keep improving like that, then I think good things are bound to come.”

Bouchard said she’d play next at the Taiwan Open, which begins Jan. 29, before taking some time off to continue training.