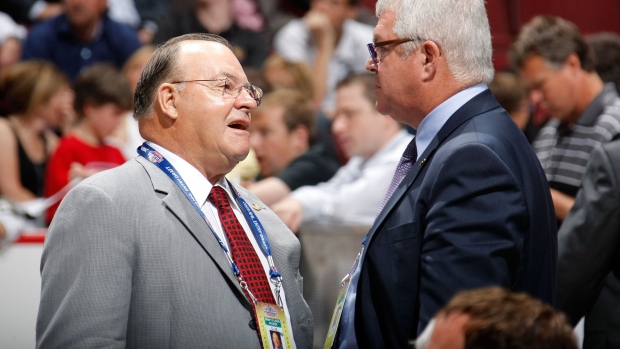 TORONTO - Hockey Hall of Famer Steve Shutt won the Stanley Cup five times under Scotty Bowman and famously said that players on the Montreal Canadiens hated the legendary coach 364 days a year, and on the 365th they got their championship rings.

Sitting in the Great Hall on the weekend of his induction, Sergei Fedorov revealed Bowman's softer side. When Fedorov was having problems in the early days of his relationship with tennis star Anna Kournikova, the legendary coach released him from the team to deal with his personal troubles.

"I really, truly figured out who Scotty Bowman was," Fedorov said. "After that I played even harder for him."

Bowman's influence on the Hall of Fame class of 2015 was significant, from Fedorov and Detroit Red Wings teammate Nicklas Lidstrom to high-scoring defenceman Phil Housley, whom he drafted with the Buffalo Sabres in 1982.

After inductees Lidstrom, Fedorov, Housley, Chris Pronger, Angela Ruggiero, Bill Hay and Peter Karmanos Jr. got their rings at a ceremony Friday, a question-and-answer session turned the spotlight on Bowman's coaching. While the 82-year-old sat quietly in the back of the room, his former players raved about him.

"Scotty, when he came to Detroit, we had a good team, but hadn't won any championships since the '50s," said Lidstrom, who won the Cup four times, including three under Bowman. "Having Scotty come and be part of something like that, we realized that we had the chance to become a great team, and I think Scott was the reason that it kind of changed the organization and changed the way we were playing.

"I think he was the mind behind us winning some Stanley Cups."

Bowman didn't deliver a Cup to Buffalo, but he helped launch Housley's Hall of Fame career.

"It was just a privilege for me that he's the one who took a chance on me and believed in me," said Housley, the highest-scoring American defenceman in NHL history. "It's a good chance for me to say thank you to him, as he's one of the biggest reasons that I was able get into the Hall."

Then Fedorov told the story about how Bowman let him leave the team to iron out off-ice issues. He missed a couple of days of practice to see Kournikova in Arizona and met the team in California.

"He wasn't missing any games, but it made sense," Bowman said. "I never worried about him, his skating and his conditioning."

A half-hour later, the highest-scoring Russian who once even played defence for Bowman's Red Wings, explained that he wanted to everyone to see that Bowman wasn't just a yeller.

"I just wanted to get across that I thought I'm one of the first guys who Scotty kind of let in, that's he's really a nice human and really understood our worries, our problems, because he doesn't behave like that at all," Fedorov said. "I had a problem and he let me take care of it, and I didn't expect that. He let me off the team, that's unheard of. I don't think so many people, even my teammates, know that."

This is one of many Hall of Fame induction weekends involving players Bowman coached. Still, he was touched by what Lidstrom, Housley and Fedorov had to say.

"It's pretty humbling because when you're coaching and you have players, you don't think way ahead, like a day like today," Bowman said. "You're just trying to get them to play at their best and trying to win some games."

Bowman won more games (1,244) and Stanley Cups (nine) than any other coach and has his name on the trophy a total of 14 times. It's only fitting that he's so linked to this class.

Karmanos won the Stanley Cup as owner of the Carolina Hurricanes in 2006, and Hay did so as a player with the Chicago Blackhawks in 1961 before going on to a long career as an executive.

Pronger won the Cup with the Anaheim Ducks in 2007 to go along with Canadian gold medals at the 1997 world junior championships, 2004 world championships and 2010 and 2014 Olympics. Housley was part of the 1996 U.S. World Cup-champion team, and Ruggiero won gold with the U.S. at the 2002 Olympics.

Kicking off his first induction weekend as chairman of the Hall of Fame, Lanny McDonald said the class of 2015 included "four dominant defencemen, one forward who could play defence and two builders who dedicated their lives to bettering the game we all love."