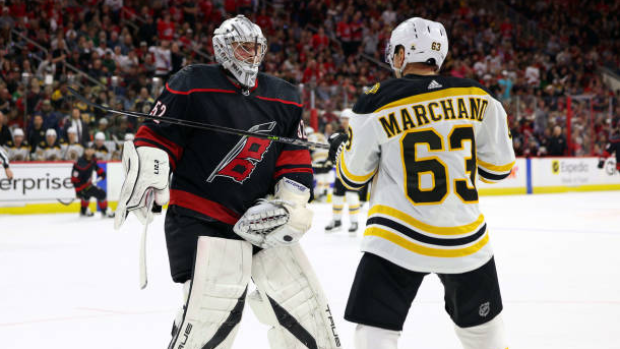 Boston forward Brad Marchand and defenceman Derek Forbort were each fined $5,000 by the NHL Department of Player Safety on Thursday for their actions in a Game 2 loss to the Carolina Hurricanes on Wednesday.

Boston’s Derek Forbort has been fined $5,000, the maximum allowable under the CBA, for High-sticking Carolina’s Teuvo Teravainen.

Boston’s Brad Marchand has been fined $5,000, the maximum allowable under the CBA, for Slashing Carolina’s Pyotr Kochetkov.

Marchand, 33, was fined for slashing after he whacked Hurricanes backup goalie Pyotr Kochetkov in the right arm after a short altercation between the two players. Marchand and Kochetkov both received slashing minors on the play.

Kochetkov was between the pipes after starting goalie Antti Raanta was forced to exit following a collision with Bruins forward David Pastrnak.

Forbort received a fine after high sticking forward Teuvo Teravainen, resulting in a four-minute power play for the Canes.

Carolina leads the first-round series 2-0 with Game 3 slated for Boston on Friday.