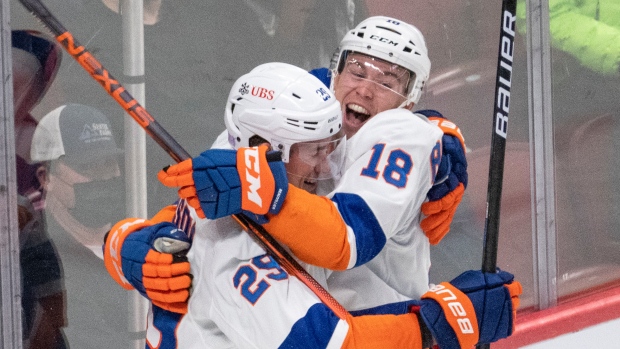 MONTREAL — Brock Nelson's first four-goal night of his NHL career was the difference in the New York Islanders' 6-2 thumping of the Montreal Canadiens on Thursday.

Nelson underplayed his accomplishment during post-game interviews saying “it’s nice to chip in and get a couple.” Islanders teammate Anthony Beauvillier, who had three assists, was more effusive.

“It was a big night for him and it reflects on the kind of player he is,” Beauvilier said. “We don’t talk about him a lot but he’s really efficient in all aspects of the game. I feel really privileged to play with him and he had a great night."

The Islanders (4-2-2), who are midway through a 13-game road trip, scored more than four goals in a game for the first time this season.

The team had a four-day break between their 3-2 overtime loss against the Nashville Predators on Oct. 30 and Thursday’s win.

Nelson said the adjustment from playing every other day to the longer break was helped by Ilya Sorokin's 36 saves in the Islanders' net.

“Bit of a weird part of the schedule for us," Nelson said. "We had a few days off so I'm all fresh. The first period was nice but then Ilya played well. I say it every time but a couple of big saves will keep us from running.”

Nelson scored the first of his four 4:14 after the opening faceoff to give the Isles a 1-0 lead after one period.

The Islanders then rattled off four even-strength goals in the second.

Wahlstrom scored his first of the season. Nelson tapped in a loose puck and completed a hat trick scoring on a two-on-one with Beauvilier.

Zach Parise fed Pageau from behind the net to make it 5-0 for the visitors after two periods.

“That’s on me. I was being too nice,” Trotz said. “I apologized to the goalie. He should’ve deserved his shutout tonight.”

The coach felt the win was encouraging for his squad, but Trotz felt the Isles have more to give.

“I've seen us play at our best and we're not close to our best yet," he said. "I think we got to get a little bit of rhythm.

The Islanders head into the back stretch of their road trip before finally inaugurating the new UBS Center on Nov. 30.

The Canadiens (3-9-0) allowed five goals or more for a sixth time this season.

Canadiens head coach Dominique Ducharme was composed after the lopsided loss. He referenced former head coach Michel Therrien’s passionate post-game press conference from 2006 when he was behind the Pittsburgh Penguins bench.

“It’s frustrating for sure but I won’t come here and do a show,” Ducharme said. “I won’t be making the headlines or being on YouTube for 20 years. So what I have to say, I’m telling my guys.”

Canadiens starter Jake Allen allowed five goals on 25 shots and was pulled following a disastrous second period in which the Islanders scored four goals. Samuel Montembeault took over and blocked all 10 shots he saw.

Suzuki and Toffoli produced back-to-back goals late in the third to close the gap, but Nelson scored his fourth into an empty net.

“I think we were OK in our structure and in the way we played the game, but it was on breakdowns and they made us pay for that,” Ducharme said. “On those mistakes, those are things that we can control and that we need to do better.”

Montreal's habit this season is to concede multiple goals in a loss following a win.

“We’re obviously not happy with the scoreboard but in the other games I thought that we weren’t doing what we wanted to do at all,” Ducharme said.

"Tonight on the execution, on the intensity, we were on top of the puck but we made costly mistakes.”