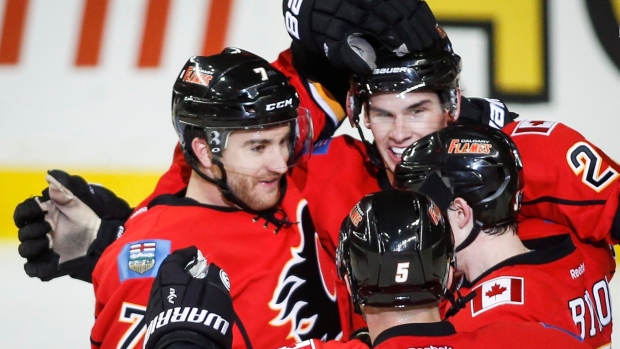 CALGARY - The Calgary Flames had to rely on a usual brand of late game brilliance to beat the Boston Bruins on Monday.

This time, they waited until 4:58 of overtime to do it.

TJ Brodie scored a fluke goal with two seconds left in the extra period as Calgary overcame a two-goal, third-period deficit to edge Boston 4-3 for its league-leading 10th victory when trailing after two periods.

"I don't know what to say anymore. Those guys never quit," said Flames coach Bob Hartley. "We always have the feeling that we can pull out those comebacks."

From near the corner, Brodie sent the puck towards the front of the net where it deflected off the stick of Brad Marchand, fluttered high in the air and ended up behind Tuukka Rask.

"I knew there wasn't too much time left, I was just trying to get the puck to the net. It took about three or four bounces and luckily it went in," said Brodie.

Rask tracked the puck OK but couldn't squeeze it.

"I tried to bend myself and grab it and it hit my glove, hit the top of the net, bounced back," said Rask.

"I think it just shows the character of the guys in the room. We want to be a team that never gives up no matter what the score is," said Brodie. "When we're down, once we get that first one, I think the confidence gets bigger with each goal."

Jiri Hudler had two goals and David Jones also scored for Calgary (32-22-3), which climbed into third place in the Pacific Division.

"That was obviously a very frustrating goal but I don't think we can blame it on that," Marchand said of Brodie's winner. "We let the game go a long time before that. That just kind of ended it on a sour note."

Hudler drew the Flames to within one at 3:22 when he buried a cross-ice pass from Sean Monahan to make it 3-2.

Calgary kept on pushing, tying it at 14:51 on the power play when Hudler deflected Mark Giordano's point shot.

"Right now, we're in a situation where we feel good," said Hartley. "We understand it won't be easy as there are many great teams in the Western Conference pushing but we're controlling our own destiny and comebacks like tonight can only add confidence of our young group."

Leading 2-0 after the first period, the Bruins extended their lead in the opening minute of the second when Krug sent a backhander over the shoulder of Karri Ramo.

The goal came on Boston's 11th shot and spelled the end of Ramo's night. He was replaced by Jonas Hiller.

The move seemed to spark Calgary, who got on the scoreboard when Jones scored as he broke in off the wing at 6:52.

"Sometimes, changing goalies is like calling a time-out," said Hartley. "You give your team a chance to change the momentum. Jonas deserves tons of credit, he came up with a few big saves and he kept the game at 3-0."

Boston struck first on Marchand's short-handed goal at 6:48, which came on a two-on-none with Patrice Bergeron after Brodie's errant drop pass.

Boston coach Claude Julien said he could feel the game start to slip away midway through the second period.

"We started turning pucks over and started getting sloppy again," he said. "It doesn't take much for the other team to gain momentum and then we get a power play and the same thing, extremely sloppy and totally out of sync and you give the other team some confidence."