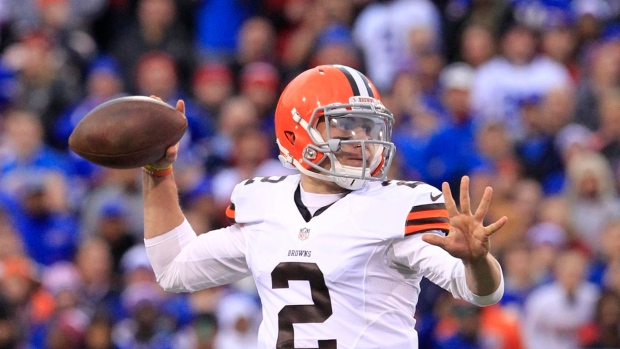 It's Johnny Football time in Cleveland.

Fox Sports' Jay Glazer reported the Browns informed both Manziel and incumbant Brian Hoyer that Manziel will start on Sunday against the Cincinnati Bengals.

The 2014 first-round pick has yet to start this season, but led a touchdown drive in Week 13 against the Buffalo Bills in relief of Brian Hoyer.

Browns coach Mike Pettine appeared to tip his hand on Monday, telling members of the media at his press conference he was not ready to make an announcement because he had "not spoken to both players involved." The inference being, no meeting would needed if the Browns were sticking with Hoyer.

Bengals coach Marvin Lewis said he was not concerned who the Browns were starting at quarterback this week, but he did take a jab at Manziel's height.

"You gotta go defend the offence. You don't defend the player... Particularly a midget," Lewis said on WLW-AM in Cleveland.

Hoyer struggled in the Browns' Week 14 loss to the Indianapolis Colts, completing just 14 of 31 attempts for 140 yards with two interceptions and no touchdowns. He has thrown for 3,196 yards and 11 touchdowns with 12 interceptions this season.

Playing only in relief of Hoyer, Manziel has completed 5 of 8 passes for 63 yards and a rushing touchdown this season.

The Browns, 7-6, sit in last place in the AFC North and one game out of a Wild Card playoff spot.