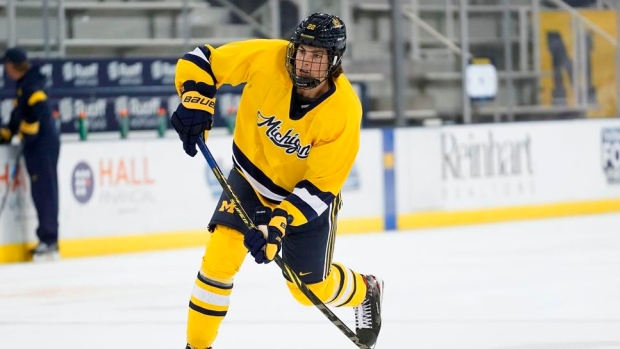 Owen Power, the first overall pick in the 2021 NHL Entry Draft, skated with the Buffalo Sabres for the first time on Sunday.

After practice, head coach Don Granato told Mike Harrington of the Buffalo News that it will likely be a few days before he gets into his first NHL game.

"We're all excited to move forward. We see this team progressing. And we see him as a big part of that progression. He's finally here and give him a couple days to acclimate with new teammates and how we operate around here before he gets his first game," said Granato.

Granato on Power: "We're all excited to move forward. We see this team progressing. And we see him as a big part of that progression. He's finally here & give him a couple days to acclimate with new teammates and how we operate around here before he gets his first game." #Sabres

More Granato on Power: "He's done a lot of things over the last many years to get ready for his first NHL game. Just in watching him play, he's very, very intense about it. He's been very intense about making himself a better hockey player and competing at a high level." #Sabres

The 19-year-old from Mississauga, Ont., scored three goals and 29 assists over 33 games with the University of Michigan this season.

Buffalo signed the defenceman to a three-year, entry-level contract on Friday.

25’s first skate as a Sabre is underway. #LetsGoBuffalo pic.twitter.com/pIxiriIT0I

Here it is for the history books, Buffalo. Your first minute of Owen Power on the ice with the #Sabres. pic.twitter.com/Yjx6LS6zJK

How about some Power passing and edge work? Nifty. #Sabres pic.twitter.com/JBwzDFhpri

The Sabres will take on the Lightning in Tampa Bay later on Sunday.

The Habs recalled goalie Cayden Primeau from the Laval Rocket of the American Hockey League on Sunday after Jake Allen left Saturday's game against the Toronto Maple Leafs with a lower-body injury and did not return.

The Canadiens have recalled goaltender Cayden Primeau from the Laval Rocket.#GoHabsGo

Allen left the game near the end of the first period after a flurry in front of the Canadiens' net that led to Maple Leafs forward Auston Matthews scoring to give Toronto a 1-0 lead.

The 31-year-old left the game after allowing one goal on 15 shots and was replaced by goaltender Sam Montembeault.

The 22-year-old Primeau has appeared in 12 games with the Canadiens this season, posting a 1-7-1 record with a 4.62 goals-against average and a .868 save percentage.

Cassidy: No Pastrnak or Lindholm tonight. Josh Brown will play on the third D pair. Otherwise, lineup remains the same from Friday’s win over Tampa Bay.