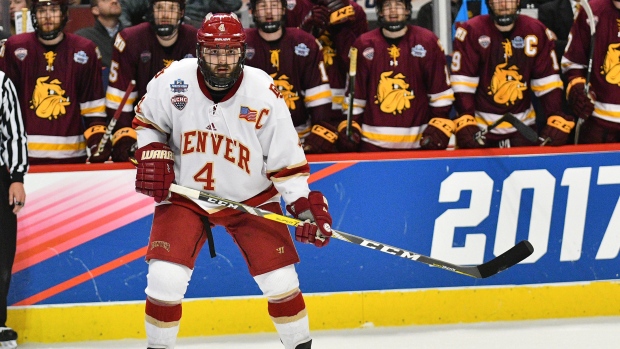 EAST RUTHERFORD, N.J. — Will Butcher believes he is ready to play for the New Jersey Devils right now.

A day after signing a two-year, $1.85 million contract with the rebuilding Devils, the 22-year-old Butcher said he was ready to make the jump from being college hockey's top player to the NHL without a stop in the minor leagues.

Speaking on a conference call, the defenceman said he chose to sign with New Jersey because he felt good after meeting coach John Hynes and he thought the Devils' up-tempo system best fit his game.

Butcher was drafted in the fifth round by the Colorado Avalanche in 2013 at the Prudential Center — the Devils' home rink. He became a free agent on Aug. 15 after failing to reach an agreement with Colorado, although the former University of Denver player said he knew by May he intended to test the free agent market.

After meeting with a number of teams, his decision came down to the Devils, Las Vegas, Buffalo and Los Angeles.

"It seemed like a great fit in how I wanted to play, and they saw me being in a better role with what they wanted to do there," Butcher said of choosing New Jersey. "It kind of reminded me a little bit of how we were going to play with my college hockey."

Butcher knows there will be competition to make the Devils' roster with veteran defencemen Andy Greene, Ben Lovejoy, John Moore and Brian Strait and youngsters Damon Severson, Steven Santini and Mirco Mueller on the roster.

"I think my game is NHL ready," Butcher said. "I think there is always stuff to learn and to pick up. That's mostly the reason why I chose New Jersey, because I felt with coach Hynes (there) was the development and how they cater to guys and help you get ready for the NHL game."

Butcher described himself as an offensive defenceman who can play defence.

"I am definitely more offensive than defensive," he said. "I try to cater to my game in the sense of making smart decisions with the puck, joining the rush at the right opportunity and using my experience to help me play in the league that I want to play in."

When asked what players would have a similar style to him he named Duncan Keith of the Blackhawks, Torey Krug of the Bruins and Greene.

"If I was fortunate to make the big team, he would be a great mentor to me, just because he does everything," Butcher said of Greene. "He penalty kills, power play, all situations. He is a smart player, not necessarily the biggest guy, but he uses his abilities to defend well and play the game of hockey."

Butcher could also help the Devils' power play, especially feeding the likes of Taylor Hall, Adam Henrique, Kyle Palmieri and Marcus Johansson and newcomer Nico Hischier, the Swiss-born centre who was the No. 1 pick in the June draft.

"I might not be the fastest guy or biggest guy out there, but I like to pride myself that I think fast and use my brain to be fast, in a sense that I try to anticipate plays and just try to use my hockey smarts to help me be effective," Butcher said.

Besides helping Denver win the national championship this past season, Butcher won the Hobey Baker Award as the top collegiate player.

A Wisconsin resident, Butcher had seven goals and a team-high 30 assists in 43 games last season. He had 28 goals and 75 assists for 103 points in 158 games with the Pioneers.