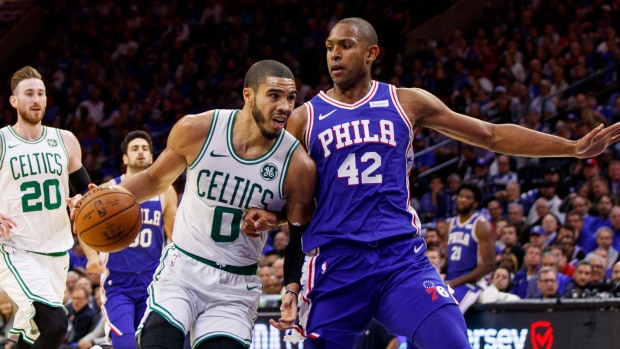 The Boston Celtics have enjoyed the month of February. The Philadelphia 76ers, on the other hand, can’t wait for it to end.

Boston has gone 9-2 this month, outscoring opponents by 6.9 points per 100 possessions — the seventh-best net rating in the league. The Celtics have placed sixth in offensive efficiency and seventh in defensive efficiency over that span.

Meanwhile, the Sixers have faltered, stumbling into a 5-5 record. Their net rating is -4.5 over that span, with the 18th-ranked defence and 24th offence.

To make matters worse, Philadelphia’s two All-Stars have gone down with injuries during that time. First, Ben Simmons left the team’s Feb. 22 game with a lower back injury and was ruled out for at least two more weeks. Then, Tuesday night, Joel Embiid went down with a shoulder injury. Both players have no exact timetable to return.

Boston has relied on its discipline to prop up its defence; the Celtics have allowed the fewest points off turnovers in the league to opponents in February. They’ve also allowed the fifth-fewest points in the paint.

The Sixers have ranked near the middle of the pack in those categories for February, but they’ve allowed the fifth-most fast break points in the league. Philadelphia’s defence in the half-court may be average or better, but the team’s inability to defend in transition has been costly.

It’s worth noting that, though they haven’t faced major injuries like Philadelphia, the Celtics haven’t been fully healthy in February, either. All-Star guard Kemba Walker has missed seven of their 11 games this month, including the last four. Other key players, Jaylen Brown and Marcus Smart, have each missed two games, while Gordon Hayward has missed one game this month.

The one constant for Boston in February has been first-time All-Star Jayson Tatum. Tatum is averaging career-highs across the board this season: 23.3 points, 7.0 rebounds, 2.9 assists, 1.3 steals, and 0.9 blocks per game.

In February, Tatum has taken his game to a whole new level. He’s averaging 30.5 points this month, shooting 51.4 per cent from the field and a scorching 50.0 per cent from beyond the arc. On Feb. 13, Tatum put up 39 points and nine rebounds to lead Boston to a double-overtime win over Kawhi Leonard’s Clippers. Ten days later, he matched his career-high with 41 points against LeBron James’ Lakers.

The Sixers may have hoped for Tobias Harris, who re-signed with them on a $180 million contract last summer, to take more of the offensive scoring load as their other stars went down with their injuries. However, Harris is averaging just 16.6 points in February, his worst scoring output of any month this season.

Harris is shooting 40.5 per cent from beyond the arc this month, but the rest of his scoring has plummeted. He’s shooting just 42.5 per cent from the field, his least efficient shooting month of the season. Harris’ field goal percentage has decreased every month since November.

Finally, Al Horford has had one of the worst statistical months of his career for Philadelphia. Horford has undoubtedly been a disappointment this season with his new team, but he’s hit new lows in February. He’s scoring 7.5 points per game this month, shooting just 33.7 per cent from the field — both his worst monthly outputs this season. Horford scored just six points in a crushing 31-point loss to Miami on Feb. 3, then bottomed out with a zero-point, 0-of-6 shooting performance in a win over the Bulls six days later.

Sixers head coach Brett Brown finally pulled the plug on Feb. 11, bringing Horford off the bench for the first time this season. Horford played as a reserve for three games, averaging a paltry 6.0 points and 5.3 rebounds in just 23.7 minutes. After Simmons’ injury, Horford returned to the starting lineup on Monday, but he still combined for only 17 points in the two games that he has since started.

With no return in sight for either of their All-Stars, the Sixers will simply try to hang on. They’re currently 36-23, good for fifth place in the Eastern Conference. Philadelphia is only half a game behind the Heat for fourth, but the Sixers are also just 1.5 games ahead of the Indiana Pacers in the standings. With a dominant 27-2 home record but a sub-.500 road record, Philadelphia will be desperate for homecourt advantage in the first round of the playoffs.

The Celtics, on the other hand, are still chasing the Toronto Raptors for the pivotal No. 2 seed in the East. Boston is 41-17, just a game behind Toronto, and the Celtics are five games ahead of Miami — securely in the top half of the playoff picture.