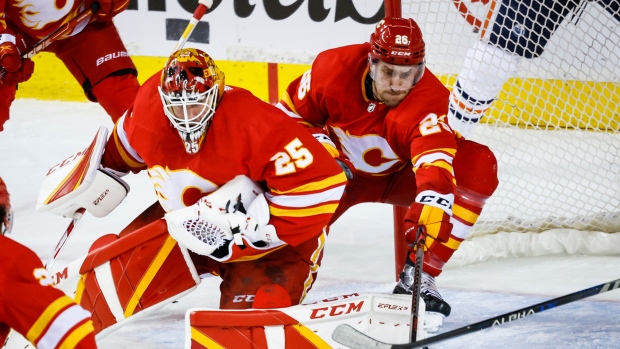 Facing the Edmonton Oilers has not been a kind experience for Calgary Flames goaltender Jacob Markstrom.

So far in the 2022 playoffs, the Oilers have put 15 goals past Markstrom through the first three games of their Western Conference semifinals matchup.

In Game 1, Markstrom let in six goals on 28 shots in a 9-6 victory for the Flames. Game 2 saw Markstrom face 40 shots on the night in a 5-3 loss. It didn’t get better in Game 3 as he allowed four goals in the second period and was replaced by backup Dan Vladar in the third.

In the regular season, Markstrom posted a 37-15-9 record with a .922 save percentage and 2.22 GAA as the Flames clinched the Pacific Division and he is one of the nominees for the Vezina Trophy as the NHL’s best goaltender.

For the Oilers, Connor McDavid has two goals and nine points in the three games against Calgary while Zach Hyman has scored in all three games of the series.

In the series, the Flames are outshooting the Oilers 40.3 to 36.3 but Edmonton has been more successful scoring, averaging five goals per game to edge Calgary’s mark of 4.33.

The Flames and Oilers face off in Game 4 tonight at Rogers Place with Edmonton holding a 2-1 series lead.