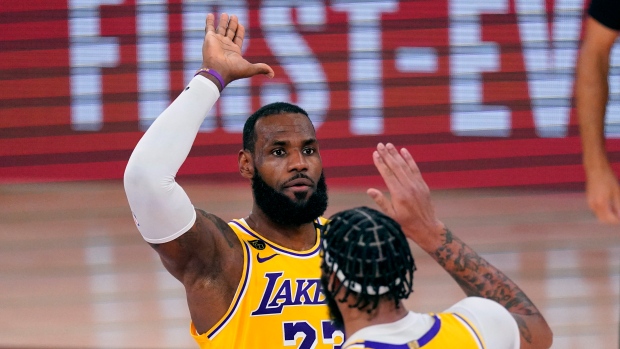 LeBron James and the Los Angeles Lakers took Game 1 of the NBA Finals in commanding fashion against the Miami Heat on Wednesday night.

Here are some interesting numbers that stood out from the night:

Jimmy Butler and the Heat got off to a solid start in their first NBA Finals appearance since James was the main man in South Beach back in 2014.

Miami got off to an early 13-point lead before Los Angeles stormed back to take a three-point lead going into the second quarter. The Lakers would dominate the rest of the way, eventually taking a 32-point lead becoming the first team in NBA Finals history to lead by 30 after trailing by double digits.

The main reason for their success in Game 1, and the whole season for that matter, is the prolific tandem of James and Anthony Davis.

In Game 1, James and Davis each scored 25 points and shot 50 per cent for the seventh time this postseason, the most times any duo have reached that feat in a single playoff run. Michael Jordan and Scottie Pippen of the legendary Chicago Bulls, as well as Julius Erving and Doug Collins of the Philadelphia 76ers, did it five times each in 1992 and 1977, respectively.

They are also the first Lakers duo to put up 25 points, five rebounds and five assists in an NBA Finals game since Kobe Bryant and Shaquille O’Neal did it in 2001.

James is playing in the 10th NBA Finals of his career, but this is the first for his running mate in Davis. And it was quite the debut for The Brow. Davis' 34 points was the fourth most in an NBA Finals debut behind Jordan's 36 points in 1991, Kevin Durant's 36 in 2012 and Allen Iverson's incredible 48 points in 2001.

Furthermore, it appears the Lakers were at their best with the six-foot-ten Davis playing centre. Los Angeles outscored Miami by 25 points in Game 1 with Davis on the court playing centre, the second highest point differential for the team this season. The Lakers also shot 6-16 from three-point range with Davis playing the five while the Heat were just 2-17 from behind the arc.