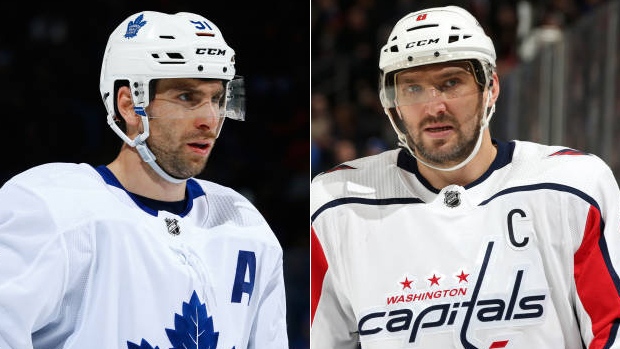 The Rocket Richard Trophy race got more interesting after John Tavares’ four-goal performance against the Florida Panthers on Monday Night.

After last night, Tavares brought his total for the year up to 45, seven goals better than his previous career high of 38, which he set with the New York Islanders in 2014-15. Tavares hasn’t gone more than five games without a goal all season. The man he is trying to catch is Alexander Ovechkin, who currently leads the NHL in goals with 48.

The Toronto Maple Leafs haven’t had a 50-goal scorer since Dave Andreychuk (53) in 1993-94. Andreychuk, Rick Vaive and Gary Leeman are the only 50-goal scorers in Leafs history. As he continues to chase 50, Tavares also surpassed Eddie Olczyk’s franchise record for goals (43) in a player’s first season with the Leafs.

The NHL is currently averaging 3.02 goals per game this season, its highest mark since the 3.08 benchmark recorded in the post-lockout 2005-06 season.

First handed out in 1998-99, the Rocket Richard Trophy has been in the hands of some of the game’s best scorers, but no one has more than the seven Ovechkin has won since 2007-08. Ovechkin has seven 50+ goal seasons to his name, which is by far the most in the salary cap era. The next closest are Ilya Kovalchuk, Steven Stamkos and Dany Heatley with two, followed by Sidney Crosby, Evgeni Malkin, Corey Perry, Jarome Iginla, Jaromir Jagr, Vincent Lecavalier and Jonathan Cheechoo with one.

An eighth 50-goal season would tie Ovechkin with Bobby Hull for the most in NHL history. The other Rocket Richard repeat winners are Pavel Bure, Jarome Iginla, Sidney Crosby and Steven Stamkos. Ovechkin is also the only player post 2012-13 lockout to record more than 50 goals in a season.

In the remaining games of this season, it will be a tight race with Tavares on a roll, scoring eight goals in his last nine, and Ovechkin and Draisaitl recording two in their last nine. No Maple Leaf or Oiler has won the Rocket Richard, but the remaining games will reveal whether they have enough to overtake Ovechkin and prevent him from winning his eighth goal-scoring title.