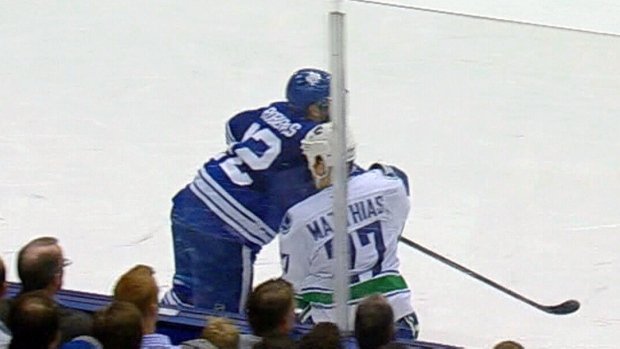 Got a question on rule clarification, comments on rule enforcements or some memorable NHL stories? Kerry wants to answer your emails at cmonref@tsn.ca.

I'm a fan of the column as you put a good perspective on some of the crazy reffing that goes on. I would love to know how Toronto's Stephane Robidas isn't suspended for elbowing Vancouver's Shawn Matthias in the head with a dirty blatant elbow this past Saturday. Now Vancouver has one of its hottest players out with a concussion. It's pretty infuriating when we see Alex Burrows get two games for a much less dangerous hit, then Robidas gets away with a dirty, blatant elbow to the head. What's wrong with this league?

Ted:
You are one of four fans that dropped this question in the C'mon Ref mail bag just last night who are curious as to why no suspension was imposed to Stephane Robidas after he elbowed Shawn Matthias in a play that resulted in concussion-like symptoms to the Vancouver player.

The Player Safety Committee has a series of criteria to determine a hit they deem to be worthy of a suspension. You can find various examples and explanations in tutorial videos contained on the NHL.com player safety website. The committee, headed by Stephane Quintal, attempt to rule in a fair and consistent manner based on the criteria they have been handed. This is certainly no easy task and every decision (or non-decision) they make is closely scrutinized by team personnel, the media and fans alike. Every play is different and must be judged on its own merit. In many situations it appears to me that too narrow a margin exists between determining an illegal play worthy of a penalty imposed by the referee in the game or elevated to a suspension after the fact with regard to player safety.

Even though this was an elbow infraction, rule 48 is the modern day standard bearer for illegal contact to the head. The rule provides a list of criteria that not only defines an illegal check to the head but offers caveats or exemptions that carry forward and become part of the criteria used by the Player Safety Committee to determine suspensions. Critical to their consideration is if an opponent's head was the main point of contact and especially whether the player attempted to hit squarely through the opponent's body and the head was not "picked" as a result of poor timing, poor angle of approach, or unnecessary extension of the body upward or outward. This is certainly an abundance of "verbiage" to digest when breaking down hits that result in varying degrees of contact to the head of a player. It is my opinion that too many caveats are being considered for not suspending a player when significant contact to the head results from a high, illegal hit.

As we look at a couple of different angles when Robidas initiated contact with Matthias we are presented with 'evidence' that would most likely have been strongly considered by the P.S.C. to determine a suspension was not warranted to the Toronto player. The camera shot from the stands, looking through the back of Matthias, indicates that Robidas' elevated arm/elbow appears to make initial contact just below the chin (neck area) of the Vancouver player. 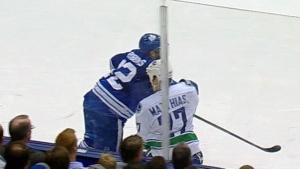 As Robidas initiates contact his upper body slides off the centre mass of his opponent and results in Matthias' head becoming the main point of contact with the right-back shoulder and upper tricep of Robidas. The cross ice shot is somewhat more incriminating that the elbow did some residual damage but it can be argued that Robidas' elbow rode up after making initial contact below the chin. 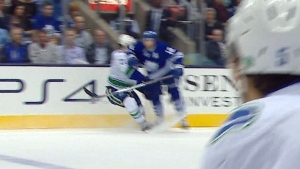 In the eye and mind of those responsible for determining a suspension this becomes an illegal elbow worthy of a minor penalty and does not cross the line of the criteria they utilize for the purpose of suspension.

Some (or even many of us) won't agree with the rationale or criteria currently being utilized to determine a suspension. Many would suggest it falls short in an effort to hold players accountable for high hits that result in various degrees of contact to the head of an opponent and can result in injury. The General Managers are presently meeting and can recommend changes to this process if they deem them to be warranted. It's their stick and puck and until such time as changes are made it will be business as usual.

I wish Shawn Matthias a full and speedy recovery.