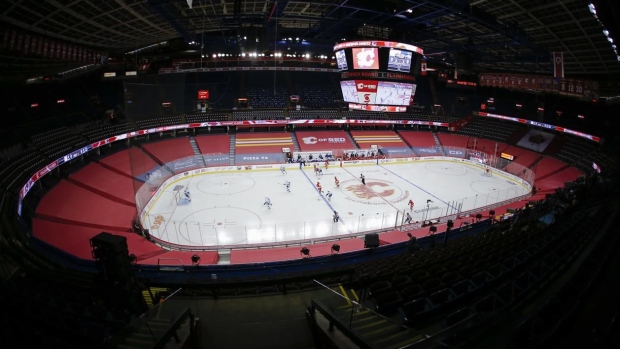 In the midst of their longest losing streak of the season, the Calgary Flames are now faced with another challenge – a COVID outbreak amongst the team.

As a result, the National Hockey League has postponed all the team’s games through Thursday, Dec. 16. Calgary was slated to play Monday evening in Chicago and Tuesday in Nashville before hosting the Toronto Maple Leafs on Thursday at the Saddledome.

The Flames’ positive tests were confirmed Sunday before the players flew to Chicago, and they are isolating in Calgary. All players and staff that have tested positive are asymptomatic.

Not sure if this has been reported but the Calgary Flames tell me that as of this afternoon, all players/staff that tested positive for COVID-19 [incl Elias Lindholm, Chris Tanev, Andrew Mangiapane] are asymptomatic and NOT sick.

The team expects the number of positive cases to climb over the coming days. Players on the Flames who did not test positive are not required to self-isolate, and instead continue to follow the league’s health and safety guidelines.

"As an appropriate precaution, the team’s training facilities have been closed, effective immediately, and will remain closed for Players until further notice," the league said in a release. "The league is in the process of reviewing and revising the Flames regular season schedule.

"The Flames organization has followed, and will continue to follow, all recommended guidelines aimed at protecting the health and safety of its Players, staff and community at large as set by the NHL, local, provincial and national agencies."

Calgary is on four-game losing streak and is coming off a 4-2 defeat to the Boston Bruins on Saturday at the Saddledome. Despite their recent struggles, the Flames remain in second place in the Pacific Division, trailing only the Anaheim Ducks, with a 15-7-6 record and had gotten off to its best start to a season since their 1988-89 Stanley Cup winning season.