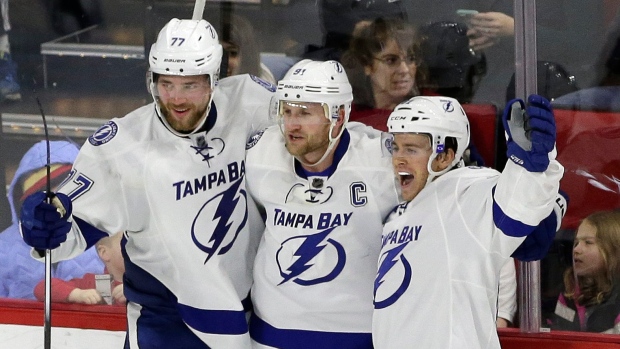 RALEIGH, N.C. - No better cure for an ailing Tampa Bay power play than Steven Stamkos alone in front of the net.

That's what Lightning centre Tyler Johnson saw late in a tie game Sunday night, and he fed Stamkos for the winning goal in a 4-2 victory over the Carolina Hurricanes.

Ryan Callahan scored twice and Stamkos had career goal No. 301 and an assist to propel Tampa Bay to its third straight win.

The Lightning had failed to score on their previous 18 power plays — and had allowed three short-handed goals in three games — before Stamkos put Tampa Bay ahead 3-2 with a shot past Cam Ward. The goal came with 4 seconds left on Jordan Staal's high-sticking minor and 5:43 remaining overall.

"There's no question that the power play's been struggling," Callahan said. "Sometimes, you need a big goal like that late in the third to get things rolling again."

Ben Bishop was strong in net for Tampa Bay, making 17 of his 29 saves in the third period. His denial of Jeff Skinner's attempt with 52 seconds left — when Carolina had gone to an extra skater — kept the lead at 3-2.

"That's why he's a world-class goaltender," Stamkos said. "We don't want to rely on him all the time to do that, but he's capable of doing that. He's a big reason why we won."

Callahan scored in the second period and added an empty-netter with less than 10 seconds remaining.

Bishop improved to 6-1 in his career against Carolina. J.T. Brown also scored for the Lightning.

Joakim Nordstrom and Michal Jordan scored for the Hurricanes, and Ward made 14 saves. Carolina has lost two of three.

Tampa Bay is 25-2-3 when scoring three or more goals this season.

The Hurricanes outshot the Lightning 14-11 through two periods and 31-18 overall, but Tampa Bay is 22-7-2 when outshot. Carolina had its six-game home point streak snapped.

"The refs put the whistles away, and it's a man's game out there," Carolina coach Bill Peters said. "You've got to step up and play. That's what it looked like to me."

Tampa Bay scored twice in the second period after falling behind 1-0. Brown scored first after a series of deflections, including one off of him that allowed him an open net to beat Ward. Callahan scored off a cross-ice pass from Stamkos 4 minutes later.

Jordan tied it by scoring his first of the season with 7:01 left in the second. Jordan took a pass from Skinner, swooped in on the left side and beat Bishop on a right-side wraparound.

Nordstrom scored short-handed to give Carolina the lead with 8:50 left in the first. Jordan Staal carried the puck up the left side and elevated a pass over defenceman Anton Stralman that bounced to Nordstrom, who back-handed a shot past Bishop.

Bishop shut down every shot after that, and Tampa Bay continued its mastery over Carolina. The Lightning has won 11 of the previous 13 meetings, scoring 41 goals in the victories. Tampa Bay has won 11 of its last 14 visits to Raleigh.

NOTES: The Lightning played without leading point man Nikita Kucherov, who was out with a lower-body injury. Kucherov (24 goals, 25 assists) had not missed a game this season. ... Jordan Staal has a five-game point streak and Nordstrom a three-game point streak for Carolina. Staal has 23 points in his last 20 games after recording 15 in his first 40. ... This was the second of three meetings between the teams. Tampa Bay won the first 4-3 on Nov. 1, and the series concludes March 5 in Tampa Bay. ... Tampa Bay's 18 shots were the fewest allowed by Carolina this season.