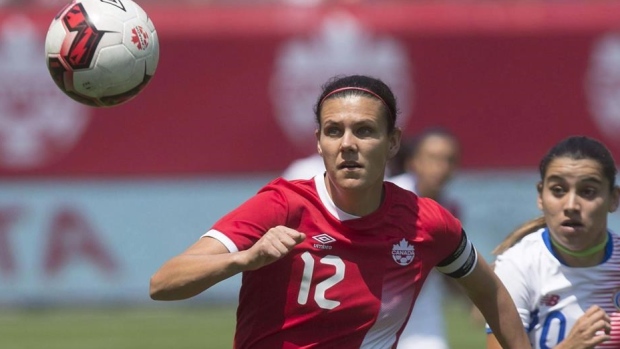 The Canadian women’s national soccer team announced its roster for the upcoming CONCACAF Women’s Olympic Qualifying Championship, as the squad begins its quest for a third straight podium finish.

The 20-player roster had to be cut down from the 23 women that went to the 2019 Women’s World Cup in France.  Sixteen players on the current squad won bronze at the Rio Olympics.

“With these qualifying tournaments, you have a maximum of two days turnaround between the matches.  The players we bring in – they have to be ready to play.  We can’t have anyone in that maybe can play,” said head coach Kenneth Heiner-Møller.

“Some of them it’s their first qualifier, some of them have been here so many times they’ve lost track. Young energy is definitely coming but also the experience…  We’ve got a lot of upcoming young players and then we’ve got our veteran group.  It’s about making that selection right on the pitch but also in the roster, and I believe we’ve done that.”

Canada kicks off its campaign for the 2020 Tokyo Olympics on Jan. 29 in Edinburg, Tex., when they take on St. Kitts and Nevis. They next face Jamaica on Feb. 1 before wrapping up the group stage on Feb. 4 against Mexico. The knockout round will move to Carson, Calif.

For Heiner-Møller, the team’s biggest challenge will be consistency.

“Which is such a boring word,” he laughs. “No matter who we play, we need to play to Canadian standards...  It’s so easy to play teams that you’re better than and then you drop to their level – you play what you have to, and not what you can.”

The Canadians will be looking to start 2020 on the right foot after ending last year on a skid. Canada lost three of its last four matches in 2019, and were outscored 9-1 in those games, including a 1-0 loss to Sweden in the round of 16 at the Women’s World Cup.  The losses resulted in Canada’s world rank dropping from fifth to eighth.

“We kind of a forgot how to get goals, so we kind of forced things a little bit, like getting too eager to go towards goal,” said Heiner-Møller.  “So we’ve put a lot of attention into scoring, and it didn’t pay off until [a 3-0 win against] New Zealand [in November].”

HOW CANADA QUALIFIES FOR THE 2020 OLYMPICS

Canada needs to make it to the tournament’s final to earn a berth in this summer’s Olympic Games, as the top two teams in qualifying move on to Tokyo. The Canadians thus must advance out of their group and win their semi-final against a Group A opponent, which consists of Costa Rica, Panama, Haiti, and the United States, the No. 1 team in the world. The result in the final doesn’t matter in terms of qualification, as both finalists will have already earned a berth in Tokyo.

The top two teams in each group advance to the semi-finals. Canada, currently ranked No. 8 in the world, stands a very good chance of finishing first in their group. While the Canadians have never faced St. Kitts and Nevis, the Caribbean team is currently ranked 127th in the world and is making its debut in the tournament.

“We don’t know much about them. There’s not a lot of footage where you can see the entire pitch or the entire team,” said Heiner-Møller. “But as I’ve said, no matter who we’re playing, it’s about us and our standards.”

Canada has won all seven meetings with Jamaica in its history by a combined a score of 48-1. The two teams most recently met at the 2018 CONCACAF Women’s Championship, which the Canadians won 2-0.

The Reggae Girlz, who are coming off their first Women’s World Cup appearance last year, will once again be led by Khadija Shaw. The forward netted nine goals in three games during last fall’s Caribbean qualifying, and in her first season with Bordeaux in Division 1 Féminine, she is currently tied for fourth in the league with nine goals.

“I think they have a striker that is top three in the world in Khadija Shaw,” said Heiner-Møller.  “Last year when we played them, she was playing in university, and now she’s playing in France on [one of the] top three teams. So she’s definitely a handful.”

Mexico is the third-highest ranked team in the CONCACAF region at No. 26 in the world. Canada is 21-2-1 all-time against the Mexicans, with their lone loss coming on March 2, 2004, during Olympic qualifying for the Athens Games.

Canada may find itself in trouble if it drops points during the group stage. Mexico is the only team in Group B to have ever earned a result against Canada, most recently in a 2013 friendly in Vancouver, which ended in a 0-0 draw.

The Mexicans have also shocked top-ranked teams before. In the 2010 CONCACAF Women’s World Cup qualifying, Mexico upset the United States 2-1 in the semi-finals, forcing the Americans into a playoff to earn a World Cup berth.

If Canada finishes second in their group, they would cross over to face the top team in Group A, which will almost certainly be the United States. Historically, this has not been a favourable match-up for the Canadians, who have only beaten their North American rivals three times in 59 meetings. Canada’s last win against the Americans came on March 11, 2001 – almost 20 years ago.

If the Canadians were to lose in the semi-finals, that would be the end of their Olympic dreams. Unlike the Women’s World Cup, there is no playoff or second chance to qualify; there are only two berths available to CONCACAF teams.

However, in the last three Olympic qualifying tournaments, Canada has a combined record of 11-0-3, and has a goal differential of plus-39.  The Canadians’ three losses came in the final of each year – all at the hands of the Americans.

Of course, all eyes will once again be on Christine Sinclair, as she sits on the verge of history. The 36-year-old has recorded 183 international goals – one back of tying American Abby Wambach for the all-time record.

Assuming she starts Canada’s first match, Sinclair has a very good chance of tying or beating the record against St. Kitts and Nevis. When Canada faced Cuba, a similarly ranked opponent as St. Kitts and Nevis, at the 2018 CONCACAF Women’s Championship, Sinclair entered the game as a second half sub and scored goal no. 174 as Canada cruised to a 12-0 win. The captain could have easily netted at least one more in the 71st minute when she was in behind the Cuban backline, but she selflessly set up teenager Jordyn Huitema instead.

Janine Beckie has been having a standout sophomore season with Manchester City, starting in all but one league game. While she has yet to score a goal in Women’s Super League play, this is largely due to a position change, as the forward has recently been moved to outside back. Beckie is coming off a quiet year with Canada with just three goals in 15 appearances, and will be looking to spark an offence that scored just 13 times in 15 games in 2019.

Midfielder Jessie Fleming enters the tournament with her club plans up in the air. The 21-year-old ended her collegiate career at UCLA as a finalist for the MAC Hermann trophy, given annually to the top collegiate soccer player. Fleming was also a nominee in 2017. Earlier this month, Fleming opted out of the NWSL draft in order to finish her degree, and while her immediate future is uncertain, she could join a club in Europe.

“She can almost pick and choose the club she’s going to,” said Heiner-Møller. “I feel she’ll improve further when she goes into a club either in Europe or the NWSL. She’s a smart player who can find the pass to either space or a player.”

Two veterans are once again absent from Canada’s roster: midfielder Diana Matheson and goalkeeper Erin McLeod. Both have been recovering from injuries that also made them miss the 2019 Women’s World Cup, and Heiner-Møller hopes to have them back in the mix soon.

“They’ve got the experience that is sometimes needed in these big tournaments,” he said. “Going into the Olympics, we’re going to cut the roster again [to 18 players], which is going to be a hard decision. You bring in players who are ready to play.

“The intelligence of Diana is something that is crucial for every team,” he added. “And we need that sometimes, but we also need her to be able to execute.”

McLeod, 36, missed the 2016 Rio Olympics after tearing her ACL for a third time, which she described as “heartbreaking.”

“She’s working hard to get back,” said Heiner-Møller. “When you talk to her, you can see the fire in her eyes, where she wants to be [this] summer. I’m not going to put that fire out, by no means.”