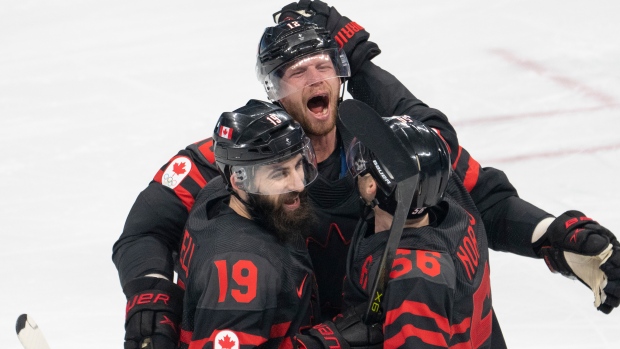 The pair got a measure of revenge Thursday.

O'Dell had two assists to go along with a crushing hit that sparked an early surge and Noreau blasted home a power-play goal to put things out of reach as Canada's Olympic men's hockey team cruised past Germany 5-1 at the Beijing Games.

The veteran duo and teammate Mat Robinson are the only returnees from the group of non-NHLers that fell 4-3 in a gut-wrenching semifinal loss to the Germans in Pyeongchang in 2018.

The result in China doesn't dull that lingering pain, but it's a start.

"For the guys that experienced that game, it was obviously tough," said O'Dell, who crushed German defenceman Marko Nowak with a thunderous hit early in the first period to set up Ben Street's icebreaker.

"Good to get the team going early," added O'Dell, a 31-year-old from Ottawa. "We obviously built off that."

"It was quite a buildup ... not just for the revenge game," said Noreau, a 34-year-old from Montreal. "But also I think just for everybody to get going.

"And with all the COVID stuff going on, it was nice to clear our heads and get ready for a game day."

In a surprising twist, Hockey Canada announced moments before warmup that Claude Julien, who had been tabbed to coach the team before breaking his ribs during training camp in Switzerland, had joined the group and would resume his duties following the game.

Jeremy Colliton stepped in to fill Julien's void and will now revert back to an assistant's role.

"Great to have him back," Canadian captain Eric Staal said of the 61-year-old. "A good boost for us."

"We're here for the same reason," Colliton added. "And with a guy with the experience and just his track record, it just makes our staff stronger."

The United States thumped China 8-0 in Group A's other game. Canada will face its North American rival Saturday before wrapping up round-robin action Sunday against the Chinese.

Thursday's game at Wukesong Sports Centre, which hosted basketball at the 2008 Summer Olympics, didn't feature the star power hockey fans envisioned just two months ago after the NHL withdrew from the event because of COVID-19 concerns.

And while the likes of Connor McDavid, Sidney Crosby, Leon Draisaitl and Tim Stutzle were thousands of kilometres away for the 9:10 p.m. local start in front of a few hundred flag-waving spectators, the game still had name recognition from a Canadian perspective.

Along with Staal, who won gold in 2010 and is looking for another NHL shot, the roster also features Owen Power and Mason McTavish, the first and third overall picks at the 2021 NHL draft.

The Germans, meanwhile, have 10 returning players, including former NHLer Dominik Kahun, from the team that advanced to the 2018 gold-medal game.

But it was Canada's lesser names leading the way on this night.

"We were ready," Staal said. "We were itching to go. It's been a long buildup."

Canada came out flying in the first period on the smaller NHL-sized ice, with O'Dell delivering that clean, bone-rattling hit on Nowak behind the German net.

The puck was worked to the point, where Grant fired home the opener off the post and in at 4:43, with Nowak, who went to the locker room and didn't return, still trying to shake out the cobwebs.

"We're a big team," Colliton said. "We're strong on the puck, spent a lot of time in the offensive zone. We showed a physical side."

Street made it 2-0 at 9:47 on a quick shot upstairs off an O'Dell pass as Julien looked on from the stands with the rest of Canada's brain trust.

"Nice to get a fast start," said Street, who along with O'Dell and Johnson combined for six points as part of Canada's energy line. "Nice to get one early, sort of settle the nerves, make the legs feel a little bit better."

Winnik stretched the lead to 3-0 just 32 seconds later on a pass from Adam Cracknell that Niederberger should have stopped.

Canada got into some penalty trouble later in the period, including an eight-second 5-on-3 man advantage, but Pasquale — last season's goalie of the year in the Russian-based KHL — was there to shut the door.

"We came out buzzing," said the netminder. "The guys played really well in front of me."

Germany, which played with more purpose after the intermission in an attempt to match Canada's physicality, got on the board at 10:45 of the second when Rieder took advantage of a turnover and fired home a rebound.

But the Canadians responded on a power play at 12:58 when Noreau thumped a slapshot past Niederberger low blocker on a clean look.

"Sometimes people don't want to shoot on the power play," Colliton said. "It was there so he just walked in and bombed it."

Power nearly got in on the action later in the period, but the German goaltender denied the 19-year-old defenceman with a terrific save at full stretch.

Not wanting a repeat of the start of the second, Canada pressed the issue to start the third with sustained offensive zone time by using a grinding style suited to the smaller ice surface before Weal made it 5-1 with 8:38 left in regulation.

Canada locked things down from there to secure a convincing victory — and a measure of Olympic payback.