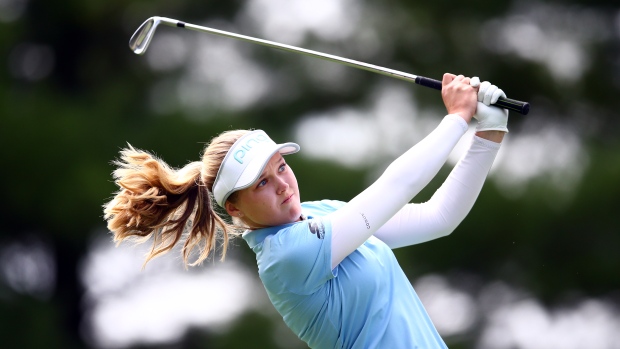 Brooke Henderson celebrated her 23rd birthday in style on Thursday, posting a 4-under 68 in the first round of the ANA Inspiration. It marked the lowest first round she’s had in six appearances at the major championship and put her in a tie for top spot after the morning wave finished.

"I’m happy with a 4 under," she said in a media conference after her round. "It’s definitely a solid start and a great way to spend your birthday."

Henderson began the round on the back nine and recorded eight pars and a single birdie. She bogeyed her 10th but played the next eight holes in 4 under. That included a birdie on the par-5 ninth hole where she hit a driver from the fairway on her second shot that ended just a few feet short of the green. A nifty chip and tap-in putt finished her day.

"I felt I was really close to making a lot of birdies (on the first nine) so I was happy when they started to fall," commented Henderson, who only missed two greens in regulation.

Her second nine was also buoyed with strong putting that saw her roll in birdie putts from outside 15 feet on the third and fifth holes. Her wedge play was also silky, including a crisp pitch on the par-3 eighth hole that she knocked to a foot for a par save.

The round was in stark comparison to her first tournament at the AIG Women’s Open, where she missed the cut, and seemed better than her three rounds at the Wal-Mart NW Arkansas Championship two weeks ago where she ended up tied for 49th. On this day she was playing her usual aggressive style, using driver at every opportunity, and taking risks when the opportunity was there.

Henderson played most of her round before the searing heat that has turned Rancho Mirage, Calif., into a furnace this week went on high. On Friday, she’ll tee off in the afternoon when temperatures are expected to reach into the 40s. That will likely alter the playing conditions, something the Canadian star is prepared for.

"Tomorrow afternoon I think we’ll have to play really smart," she predicted, "play our way around the golf course by hitting to specific spots and just being careful of run-outs on the fairways and the greens."

The punishing heat has led LPGA officials to allow the caddies to use carts and Brittany Henderson, Brooke’s older sister and caddie, took advantage. She would zip up to the ball and get the proper yardage before Brooke would arrive. The cart will be in play for the next three rounds, the younger Henderson said.

Getting off to a fast start is imperative for Henderson. In all nine of her victories, she’s opened with a score in the 60s. She’s never had more than two rounds in the 60s at the ANA Inspiration and never been higher than eighth after any round of the tournament.

As for her birthday plans, Henderson said it would likely be a quiet evening.

"I don’t think too much," she said. "Probably just hang out and have some cake."