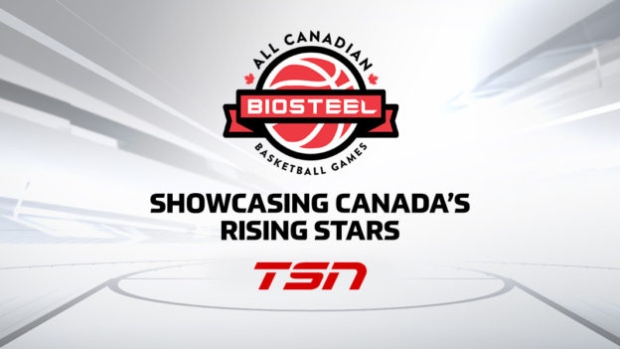 TORONTO (March 1, 2019) – Canada’s annual showcase of the next generation of basketball stars is bigger than ever, as TSN today announced broadcast details for the newly expanded BIOSTEEL ALL CANADIAN BASKETBALL GAMES. The 2019 event features both boys’ and girls’ games for the first time ever, and TSN delivers exclusive live coverage of both showcase matchups on Sunday, March 31.

Since the event’s debut in 2015, Canada’s marquee high school basketball showcase has produced a multitude of players who have gone on to star in both NCAA® MARCH MADNESS® and the NBA.

Airing live from the University of Toronto’s Goldring Centre for High Performance Sport, the BIOSTEEL ALL CANADIAN BASKETBALL GAMES feature Canada’s top boys and girls high school basketball players, with 24 players competing in each game. Full rosters for the boys’ and girls’ BIOSTEEL ALL CANADIAN BASKETBALL GAMES will be revealed during the TANGERINE RAPTORS BASKETBALL ON TSN halftime show when the Toronto Raptors host the Houston Rockets on Tuesday, March 5 at 7:30 p.m. ET on TSN.

In addition to the BIOSTEEL ALL CANADIAN BASKETBALL GAMES, numerous events are set to take place at the Athlete Institute in Orangeville, Ont., on Friday, March 29 and Saturday, March 30 as part of the Nike Skills Challenge. Friday evening’s events include the Nike Girls Futures Game and All Canadian Mixed (Co-ed) Scrimmage. Saturday’s lineup includes the Nike Boys Futures Game, Three Point Shootout and the Slam Dunk Competition. Additional details, including participants, will be announced in the coming weeks.

“I am so proud of what this game has become and to see the graduates from our game succeeding at the next level is so inspiring for our youth,” said John Celenza, Co-Founder and CEO, BioSteel Sports Nutrition. “It was our goal to become a Canadian staple and Canada’s flagship game, but this year with us being able to have the girls game broadcasted coast-to-coast along with the boys, I think this is our greatest milestone to date. I’ve got two young daughters at home and another on the way and for them to see the girls on TV living out their dreams just like the boys, it really hits home.”

“We’re excited to not only broadcast Canada’s marquee high school basketball event once again, but to showcase the country’s best girls basketball players for the first time in an important milestone for this event,” said Shawn Redmond, Vice-President, Discovery and TSN. “We’re very proud to continue to work with our great partners to showcase these immensely talented young players on TSN.”

“We’re extremely proud to grow the BIOSTEEL ALL CANADIAN BASKETBALL GAMES into an equal opportunity event, featuring nationally focused games for both boys and girls,” said Jesse Tipping, Executive Director, BioSteel All Canadian Games. “We’re very excited for the Canadian public to see the talent of the country’s next wave of girls basketball players displayed on a national stage.”

The slate of sponsors for the fifth annual BIOSTEEL ALL CANADIAN BASKETBALL GAMES includes Nike and AMJ Campbell.

Selection Committee
Rosters for the BIOSTEEL ALL CANADIAN BASKETBALL GAMES are determined by a unique selection committee comprised of a cross-section of Canadian basketball stakeholders. These include provincial and territorial representatives, clubs, coaches, and scouts from across the country. Additional information regarding the selection process is available through the event’s official website.

The BIOSTEEL ALL CANADIAN BOYS BASKETBALL GAME selection committee is comprised of:

The BIOSTEEL ALL CANADIAN GIRLS BASKETBALL GAME selection committee is comprised of: