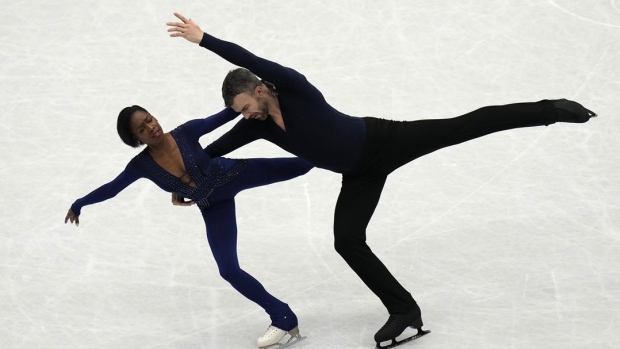 MONTPELLIER, France — Canada's Vanessa James and Eric Radford have ended their season — and perhaps their career together — on a high note, earning bronze in pairs figure skating at the world championships.

Alexa Knierim and Brandon Frazier of the United States won gold on Thursday with a score of 221.09. Japan's Riku Miura and Ryuichi Kihara took silver with 199.55.

Radford, from Balmertown, Ont., and the Toronto-born James earned their medal with 197.22 points, a season's best for the pair. The Canadians came out of retirement to team up last April after decorated careers with other partners.

"It was amazing to have that skate," said Radford, who at 37 is the oldest skater competing at the event. "It was an incredible and unforgettable experience for us even as experienced competitors that we are.

"The technical aspects were there today but we really got to release and feel that skate from the heart and that’s the best feeling.’"

Five of the top pairs from last month's Beijing Olympics were absent, including the Russian silver and bronze medallists in Beijing after the Russian team was banned from the event due to the country's invasion of Ukraine. Olympic champions Sui Wenjing and Han Cong and Chinese teammates Peng Cheng and Jin Yang are also absent from worlds.

James and Radford were fifth after the short program on Wednesday. They gained a spot when Americans Ashley Cain-Gribble and Timothy Leduc, second after the short, withdrew. Cain-Gribble was injured when she fell on a jump halfway through the program.

"Everything came together just as we needed to," said James, who competed for France before teaming up with Radford. "We didn't just fight, we didn’t just skate and think about the elements we really performed it and felt comfortable on the ice."

James and Radford haven't said whether they're retiring after the worlds.

"It would just be so exciting to explore what we're capable of, to be able to just work and really explore new programs and maybe some different styles and then start from where we are now, it would be so exciting and it would be really fulfilling," Radford said last week. "But as you can imagine, I'm 37, you have to feel very, very motivated."

Evelyn Walsh of London, Ont., and Trennt Michaud of Trenton, Ont., climbed from eighth to sixth with 176.02 points.

"We had to fight for some elements, it wasn’t easy," said Walsh. "We were really trying to enjoy this performance which is the last one of the year and not feel too tense."

Messing, 11th at the Olympics, produced a clean program and is still in contention to equal or better his career best sixth from last year’s worlds.

"I hit all my levels today which I didn’t do at the Olympics," said Messing. "I was a little bummed about the technical side of things but honestly, I stayed on my feet and kept space for bigger and better things."

This report by The Canadian Press was first published March 24, 2022.