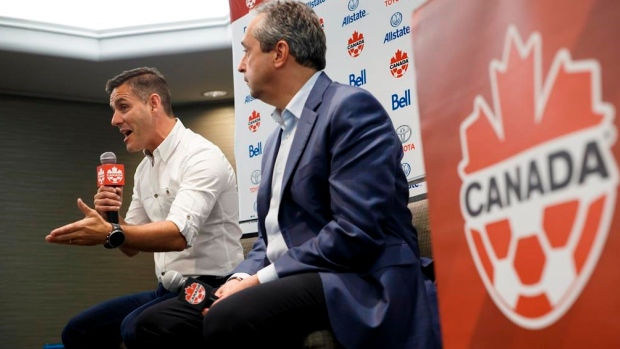 TORONTO — Head coach John Herdman sees a clear path to the 2022 and 2026 World Cups for Canada's men's soccer team, and it begins with the Nations League.

Herdman outlined Canada's eight-year plan to qualify for the 2026 World Cup on its own merits on Tuesday, even though it could earn an automatic berth as a co-host with Mexico and the United States.

One of Herdman's first steps is leading Canada to a strong showing in CONCACAF's Nations League, a new format that will include all of the organization's 41 member nations.

The Nations League will be divided into three groups and will crown a champion at the end of every competition. It will also serve as a qualifying path for the biennial Gold Cup and is expected to influence seeding in future World Cup qualifying.

"We hopefully will be a stable diet for Canadians, not only the hardcore fans," said Herdman. "There's a journey here, we can see it all connect, every result is critical, it's a league. We either finish at the top of the league and be successful or bottom of the league and we're rubbish. I think the fans can get behind that.

"It's not like we're going to take random friendlies in Spain against New Zealand for what purpose, I don't know."

Canada will begin the Nations League Qualifying series on Sept. 9 at the U.S Virgin Islands and will host Dominica at Toronto's BMO Field on Oct. 16. The Canadians will face St. Kitts & Nevis on the road on Nov. 18 and then host French Guiana on March 26.

The top 10 teams from the qualifying round of the Nations League will advance to the newly expanded 16-team Gold Cup in 2019, joining the United States, Mexico, Costa Rica, Honduras, Panama and Trinidad and Tobago. The Gold Cup teams will also form the top of the three groups that make up the new continental league. There will be relegation and promotion between Groups A, B and C.

"Those four matches give us an opportunity to really start assessing the players," said Herdman. "It's not a given that you're going to qualify for the Gold Cup. Every game is critical to our success in achieving a World Cup qualification berth."

Herdman sees this as an opportunity to engage fans and help draw in top tier players that hold dual citizenship that have previously opted to play for countries other than Canada.

"I think a big part of our success will be if we hold on to those dual passport players," said Herdman, who made the point that he's an immigrant himself, having been born in the United Kingdom. "If they don't see the national team playing, if they don't see us competing, if they don't feel it's a relevant environment to be in then they'll move on. It's natural.

"This Nations League and this journey to (the 2022 World Cup) provides consistency of getting the Maple Leaf in front of people."

Canada Soccer's long term target is the 2026 World Cup, which it will host with Mexico and the United States. General secretary Peter Montopoli said it was "very" likely that Canada would get a berth as co-host.

Even with that likely entrance into the World Cup, Herdman wants to have his squad competitive and earn a berth on its own merits.

"We should be qualifying," said Herdman. "People get disappointed when Canada's women's team doesn't win the World Cup. It's expected. We should expect to qualify.