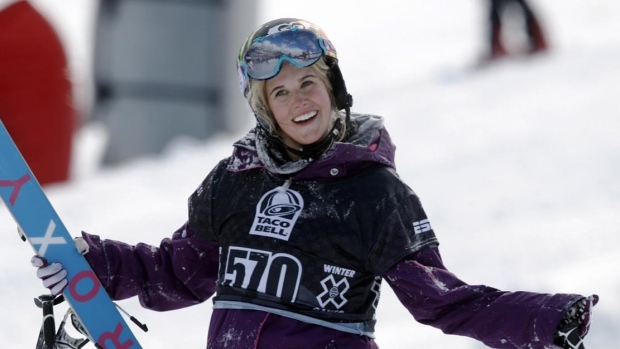 ZHANGJIAKOU, China — Every time a Canadian freestyle skier entered the wax cabin at the Beijing Olympics, they were reminded of Sarah Burke.

The freestyle skiing pioneer's name was written across a Canadian flag hanging in the space where technicians prepared the skis of Canada's Olympians competing at the 2022 Winter Games. Burke won five Winter X-Games gold medals in the superpipe and successfully lobbied to have the sport added to the Olympic program in 2014.

Burke was supposed to compete in the sport when it made its debut at the 2014 Sochi Olympics, but she died two years before those Games following a tragic training accident. She was 29.

"She's here with us," halfpipe silver medallist Cassie Sharpe said on Friday of the flag honouring Burke "She's pretty much the reason that we do compete in this sport at the Olympics. She was a massive push and a pioneer for that."

Burke, from Barrie, Ont., shaped freestyle skiing on and off the slopes in the early 2000s.

She began her career by competing against men, winning the halfpipe event and taking second place in slopestyle at the 2001 US Freeskiing Open.

Burke lobbied ESPN to create a women's division at its Winter X-Games, which the American sports network agreed to in 2005. That same year halfpipe debuted at the FIS Freestyle World Ski Championships. Burke won the first-ever world championship in the discipline.

She was also the first woman ever to land a jump with a 1080-degree rotation in competition.

"I remember her just being such a huge inspiration to a lot of young Canadians, men and women, and she really advocated for our sport," said Rachael Karker, who won bronze in women's halfpipe behind Sharpe.

"She is such a big reason that we can do what we do. I just really hope that she would be really proud to see two Canadians on the podium today."

Added Sharpe: "Hell yeah, she would."

Noah Bowman, who finished fourth for Canada in the men's freeski halfpipe on Saturday, also credited Burke with inspiring him to take up the sport.

"She's just the ultimate legend," said Bowman. "She did so much to help get us here and to give us this opportunity to be in the Olympics and showcase our sport to the world and so I'm forever thankful for the influence she's had on skiing and myself as an individual.

"I know she'd be so proud to see what we're doing out here and how far the sport's come. We ski with her every day in our hearts."

"Her impact on the sport is unparalleled, and so inspiring," said Gu, who won gold in the big air and halfpipe competitions and silver in slopestyle at Beijing. "She pushed the boundaries and she stood for everything that I stand for now.

"She was so ahead of her time and I think that her legacy will never fade, because we all owe her so much just to be able to be here today."

This report by The Canadian Press was first published Feb. 20, 2022.