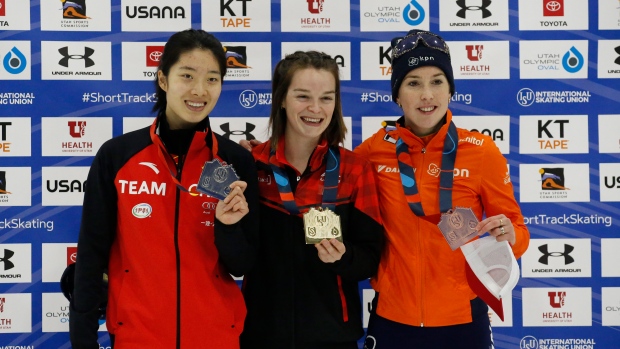 Boutin continued her blistering start to the new ISU World Cup campaign by winning gold in the women’s 1,000-metre Saturday in Montreal.

The 24-year-old from Sherbrooke, Que., also topped the podium twice last week in the season-opening event in Salt Lake City, Utah – in the 1,500 and 500 races.

Boutin has crossed the finish line first in all 11 of her individual races, from qualifying heats to the finals.

“That’s three-for-three for me, and one gold medal in each distance makes me feel good,” said Boutin, who also set a new 500-metre world record last week. “I feel really good. It’s a nice start to the season internationally. I’m happy with how I’m racing.

“But I don’t want to rest on those laurels.”

Boutin finished first in 1:30.827 after taking a lead with three laps to go and easily broke away from the other skaters.

“I was in third place and the Koreans were skating so fast,” said Boutin, describing her gold-medal race. “I saw their strategy of trying to block me. I tried making a move to the outside, then moved inside. I’m happy with that maneuver because it’s one of the weak points I need to work on.”

Dubois started the race last, biding his time at the back of the pack. The 22-year-old made a move to the outside and jumped into third with two laps to go, then passed Tianyu on the inside with another burst of speed to claim silver.

“I knew I had that in me,” said Dubois, who fell twice last week in Utah. “To do that in the 1,000-metre, my weakest distance, I nearly cried earlier. I’m so happy. I came into this race with confidence, and now that I made it happen, I’m eyeing gold medals for the next races.

“I felt really in shape this weekend and this is the proof.”

Hamelin fell in the 1,500 semifinal and failed to advance to the final. The 35-year-old veteran was in third place with three laps to go when he stepped on a lane marker with his left skate and flew into the safety padding.

“I stepped on a block and that’s inexcusable,” said Hamelin, who made his World Cup debut in 2003. “I was feeling good. My legs were in it. I was exactly in the position I wanted to be, near the front of the pack. I was waiting for those last few laps to make a real push.

“I managed my race well, until my fall.”

Rikki Doak of Fredericton, N.B., fell in the women’s 1,000 semifinal while Montreal’s Alyson Charles was penalized for an arm block at the finish.

Courtney Sarault of Moncton, N.B., finished second in her 1,500 semifinal but was disqualified for an arm block.

Claudia Gagnon of Saguenay, Que., finished sixth in the 1,500 women’s final while Montreal’s Maxime Laoun came in last in the 1,000 men's final.

The finals for the 500 and relay races will take place Sunday. The Canadian women qualified for their relay final while the men failed to advance past the quarter-final.

Notes: Boutin and Dubois are the national champions after they each won six gold medals at the Canadian short-track championship two months ago. … The next stop on the World Cup short-track circuit is Nagoya, Japan on Nov. 29.