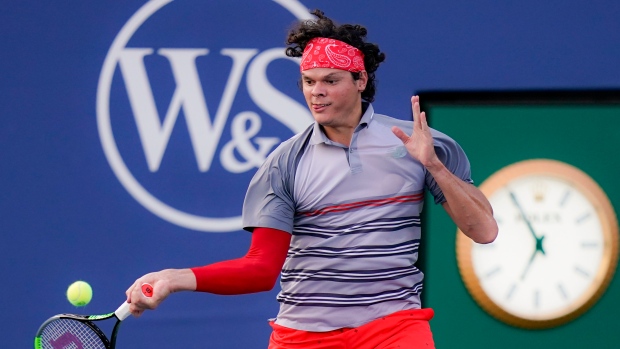 NEW YORK — Milos Raonic advanced to the round of 16 at the Western & Southern Open before fellow Canadians Felix Auger-Aliassime and Denis Shapovalov were eliminated on Monday.

Raonic, from Thornhill, Ont., beat Britain's Daniel Evans 6-3, 7-5 in a second-round match at the opening tournament in the ATP Tour's restart.

Raonic, ranked 30th, rode his big serve to victory against the world No. 28.

The Canadian never faced a break point and won 89 per cent of his points on his first serve.

Montreal's Auger-Aliassime led 5-4 with serve in the third set before losing all four points in the ensuing game to put the match back on even terms.

In the tiebreak, Auger-Aliassime led 5-4 with serve before double-faulting and then making an unforced error. The 55th-ranked Sandgren then won on serve.

Sandgren, 29, was emotional throughout the match, often yelling at himself. It was in stark contrast to the 20-year-old Auger-Aliassime, who was far quieter.

It was a sloppy match, with Auger-Aliassime making 58 unforced errors, 13 more than Sandgren. The Canadian also double-faulted 15 times.

Auger-Aliassime called it "a really bad day" in terms of his level.

"Today was tough to say the least, starting from my serve but then going on to other things that weren't going well in my game," he said.

In doubles play, Raonic and Auger-Aliassime dropped their round of 16 match to American Rajeev Ram and Britain's Joe Salisbury in a walkover.

Shapovalov, from Richmond Hill, Ont., lost his fourth match in a row against the 34th-ranked Struff.

The German broke Shapovalov in the final game of the match.

Normally held in Cincinnati, the Western & Southern Open is being played at the same site as the U.S. Open this year because of the COVID-19 pandemic. No fans are in the facility.