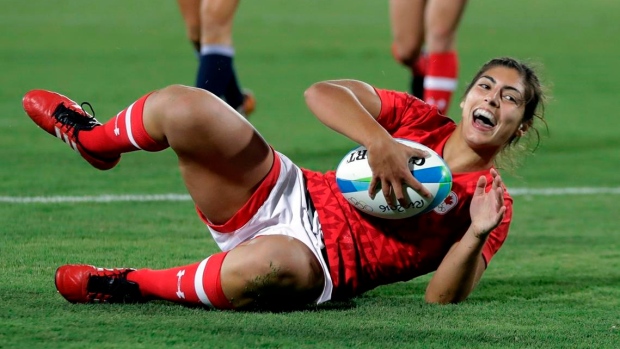 DUBAI, United Arab Emirates — Bianca Farella scored three tries Friday as the Canadian women advanced to the Cup quarterfinals of the Dubai Sevens despite a heavy loss to the U.S.

Canada's men headed to the consolation round on their first stop on the HSBC World Rugby Sevens Series this season, however, after going 1-1 on the day at the Sevens Stadium.

Canada then ran into a rampant U.S. side, which scored three first-half tries to lead 17-0 at the break. A Farella try, her fifth of the tournament, gave Canada some hope but the Americans responded with three more tries for a 34-10 win. Kaili Lukan also scored a second-half try for Canada.

American Cheta Emba, who stands almost six feet and weighs 176 pounds, showed her power with two tries in the second half. The first came after ripping the ball out of Canadian captain Ghislaine Landry's hands with the second coming after running over would-be tackler Karen Paquin.

The Canadian women, who finished a disappointing sixth in Glendale, Colo., in the opening stop on the women's circuit, play France on Saturday in the quarterfinals. The unbeaten French, showing tenacious defence, upset defending champion New Zealand 19-14 to win Pool C.

The other women's quarterfinals pit unbeaten Australia against Spain, Fiji against New Zealand and the U.S. against Russia. The Americans are looking for their third straight win on the circuit after finishing last season with the title in Biarritz, France and hoisting the cup in Glendale.

Canada was third overall on the World Series last season, behind New Zealand and the U.S.

In a shock result on the men's side, defending Series champion Fiji finished third in its pool and failed to make the Cup quarterfinals for the first time ever. The Pacific Islanders, who won five of the 10 events last season, lost to 24-21 to Argentina on a late try by Marcos Moroni and failed to score enough points in a 24-14 win over France to catch the second-place Pumas with France, Argentina and Fiji all finishing group play on seven points.

Things don't get any easier for Canada on Saturday when it faces Fiji in a ninth-place playoff.

The men's Cup quarterfinals are France versus England, New Zealand versus the U.S., South Africa versus Argentina and Australia versus Samoa.

The Canadian men, who lost 19-12 to Samoa on a late try Thursday, opened play Friday with a 31-7 loss to defending champion New Zealand before rallying to beat a young Wales side 31-14.

Salesi Rayasi paced New Zealand with a hat trick of tries against Canada. The All Blacks ran in three first-half tries to lead 19-0 and added two more in the second half.

Ben Roach opened the scoring for Wales after fending off a Harry Jones tackle. Jones rebounded to help set up an Isaac Kaay try to cut the lead to 7-5 before Matt Mullins raced over for a converted try and a 12-7 lead at the break.

Wales was reduced to six men for the start of the second half after Welsh captain Luke Treharne, a doctor when not playing rugby, was sin-binned for a high tackle on the Mullins try. Kaay took advantage of a Welsh kicking error on the restart as Canada stretched the lead to 19-7. Tries by Phil Berna and Cooper Coats completed the Canadian scoring.

Wales had lost its previous matches against New Zealand and Samoa.

New Zealand defeated Samoa 40-7 to win Pool C. The All Blacks and Samoans huddled together before the game to say a prayer and pay tribute to the victims of the measles outbreak back home in Samoa.

Canada was third in the pool.

Henry Paul took over for the final two tournaments with the men tying for seventh in London, matching their best finish of the season, and placing ninth in Paris. Paul has since taken over the team full-time, leading it to Olympic qualification and a silver medal at the Pan American Games.

Dubai is the first of six joint men's and women's events this season, which features an expanded eight-stop women's circuit. The men's tour remains at 10 tournaments.