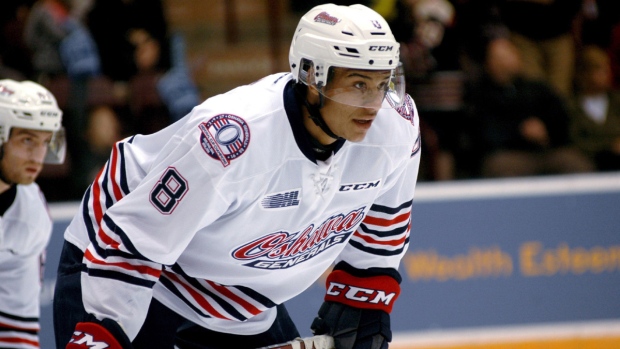 "Everyone likes his intermission speeches, they’re pretty short," said a smiling Liam Foudy, who plays for Hunter with the OHL Knights in London. "That’s what the guys always joke about, he's like under 10 seconds."

Hunter prefers to delegate to his assistant coaches, who will take up any issues with the players. But with Canada trailing Finland 5-0 after the first period on Thursday Hunter addressed his young group.

"It was unusual for him," said Connor McMichael, who also plays for Hunter in the OHL. "Obviously, in London we don't really lose by that much usually so you could tell he was a little upset. It was good for him to come in and be honest ... he also stayed positive and said we should stick to the things we were doing well."

There were certainly some reasonable explanations for the sluggish start. The Finnish team had already played together for a few games while most of this Canadian roster was playing for the first time at the camp after sitting out Tuesday’s win over the United States.

"They were more into game mode than us," McMichael pointed out. "We'll come out stronger next time."

But the one-sided scoreline was still somewhat jarring.

"They jumped on us early and kind of shocked us a bit," said Hunter. "Definitely a slow start. We didn’t give our goalie (Rimouski's Colten Ellis who allowed seven goals on 24 shots in the first half of the game before giving way to Alexis Gravel) much of a chance. They were coming down, back-door plays, we weren’t ready, we weren't taking our guys in front so it's a good learning curve. It's one of those games you can take a lot out of, you got a lot to teach."

Defensive-zone coverage was an issue. Discipline was also a problem as Canada was whistled six times leading to two Finnish goals.

"It was a pretty rough night for me, to be honest,” the Florida Panthers prospect said glumly. "The coaches stressed before the game and throughout camp that you can’t be taking penalties, because teams like this, they're so good on the power play. So, next game we’ll have to smarten up."

"We took too many today," said Hunter, "and we'll go over it. Some of them have not played under these rules and so it’s a learning thing."

Hunter has coached London in five Memorial Cups, winning twice, and also guided Canada's under-18 team to a gold medal at the 2013 Ivan Hlinka Memorial Cup. Considering his long and distinguished run, it seems odd that this is the first time Hunter has been asked to run Canada’s bench on the biggest junior stage.

"You know, I've been busy," he explained. "I've been up with the Capitals (in the 2011-12 season) so it’s always been one of those things that I had other stuff on and we had great coaches so it was always in good hands and I always enjoyed watching it."

Does he feel like he has something to prove?

How does he want Team Canada to play when the tournament starts on Boxing Day?

Hunter, who turned 59 on Wednesday, has managed to stay on top of his profession by marrying a strong work ethic with an ability to constantly adapt.

"He puts more time in than people think," said brother Mark Hunter, the GM of the Knights. "He’s constantly trying to find ways to get players better and put them in a position to be successful. Certain players play a better style and getting the right style for his team, I think, is important."

Hunter's love of coaching was fostered during 19 years spent playing in the NHL.

"It's funny," he recalled earlier this week. "Back then we didn't have Internet or nothing, we had the newspaper and every Tuesday all the stats of the National Hockey League came out and, if we were on the road, we were always in the back of the bus and Dave Tippett was back there with me, Joel Quenneville, Craig Berube, and they all went back … We were curious all the time. Why was this team winning? Why is this guy playing well now?”

Hunter is constantly learning and he can draw on his experience at the 2013 Hlinka event where Canada split its opening two games before needing a shootout to beat Switzerland.

Foudy brings a speedy presence to Canada’s summer camp and he comes by it honestly. His mom (France Gareau) was an Olympic sprinter, who won silver in the 4x100 relay in 1984, and his dad (Sean Foudy) was a CFL safety winning the 1994 Grey Cup with B.C.

Liam Foudy excelled in track growing up and is still the 300m hurdles record holder at the Ontario Federation of School Athletic Associations level.

"I still have one Grade 10 record left right now, still holding it," he said with a smile. "I take a lot of pride in that. I’m pretty nervous watching whenever it has a chance to be broken. I like having that. I watched this year and the kid wasn’t close to getting it. I ran 37 seconds and the kid ran 39 so I still got it."

Foudy, a first round pick of the Columbus Blue Jackets in 2018, believes his track background has helped him in his hockey career.

"Doing track training all the way growing up, it added to my speed and speed is a big part of my game on the ice," he said, "and that all translated from my track workouts."

Edmonton Oilers second-round pick Raphaël Lavoie​ is focusing on nutrition this summer in the hopes of taking his game to the next level.

"I changed my diet," the Halifax winger revealed. "I’m going on a nutrition plan to help me gain some weight and feel better and have more energy on a daily basis."

Some of his guilty pleasures in the past have included McNuggets, fries and the McFlurry.

"A lot more chicken, rice, more vegetables and all that stuff that’s good for you," he said. "You feel better in the morning, you're less tired."

The six-foot-four Lavoie is listed at 198 pounds, but isn't sure what his ideal playing weight is.

Lavoie was a force to be reckoned with during the QMJHL playoffs, posting 32 points in 23 games and Edmonton wants to see more of that next season.

"It's just consistency," said Oilers vice-president of player development Scott Howson, who's keeping tabs in Plymouth this week. "He had a bit of an up-and-down year, sensational playoff in Halifax, but he had some fits and starts during the year so we want to see the consistency. We want to see the compete level every night and I think if he does that he's got a real good toolbox. He's got size, he's got skill, he's got a shot so it's really about competing and consistency."