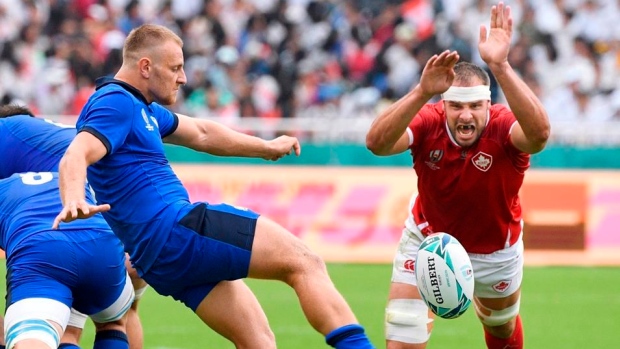 CARDIFF, Wales — A pair of Canadians will suit up for the famed Barbarians in a rugby doubleheader against Wales on Saturday at Cardiff's Principality Stadium.

Canada captain Tyler Ardron is set to make his third straight start for the men's Barbarians while Canadian international Brianna Miller will come off the bench for the women's Baa-Baas.

The Barbarians, an invitational all-star side known for its free-flowing style of rugby, date back to 1890. The female Barbarians debuted in 2017 with former Canada captain Kelly Russell taking part in the inaugural match.

Ardron, a 28-year-old from Lakefield, Ont., plays his club rugby in New Zealand for the Gallagher Chiefs.

Miller is a scrum half and fullback with Canada and Sainte-Anne-de-Bellevue RFC.

Ardron also started in the Barbarians' 33-31 loss to Fiji at Twickenham and captained the side to a 47-22 win over Brazil in Sao Paulo.

Stan McKeen captained the Barbarians against Bedford in 2011.

Once invited, a player becomes a life member of the famous club.

In the early 1960s, the Barbarians asked B.C.'s Douglas (Buzz) Moore to play against Canada while on tour in Britain. He declined, leading the Canadians to a 3-3 tie against the all-stars. The Barbarians made him an "honorary Barbarian.''