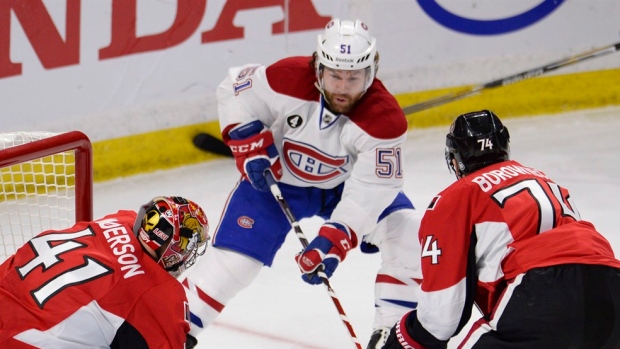 TAMPA, Fla. - David Desharnais did not travel to Florida with the Montreal Canadiens because of illness, but coach Michel Therrien did not rule out the centre playing in Game 3 against the Tampa Bay Lightning on Wednesday night.

Desharnais has an illness that prevented him from flying with the rest of the team Monday after missing Game 2 on Sunday. With an extra day off before the series resumes, there's time for Desharnais to make the trip himself.

"Before I make any decisions regarding the lineup, I need to find out if David is going to be available to play," Therrien said on a conference call Monday. "There's a possibility that he'll be there Wednesday night, but we're not quite sure yet."

Brian Flynn replaced Desharnais in the lineup for Game 2, a 6-2 loss at Bell Centre.

Desharnais has two assists in seven playoff games this spring.

Montreal trails the series two games to none.