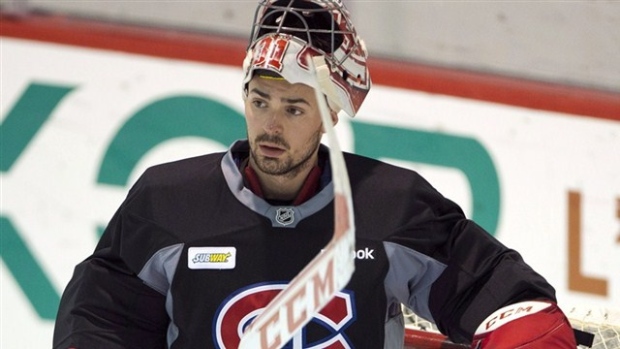 Prior to the Montreal Canadiens final preseason game against the Ottawa Senators goaltender Carey Price was presented with the Jean Beliveau trophy by none other than Mrs. Elise Beliveau, the treasured wife of whom the trophy is named after.

The award is given out each year to a player on Canadiens in recognition of their outstanding charity work and community involvement. Price who is considered to be one of the top goaltenders in the world has put his fame to good use.

One of the ways he gives back is by donating a pair of tickets to each home game that includes a meet and greet with him to a well deserving student and their mentor as part of his "Stick with School" program. But he hasn't been doing this alone, a lot of the credit for his exceptionally charity work goes to his wife Angela Price.

"I think my wife deserves her name on the trophy more than I do, she's really the catalyst behind a lot of the work," he told the media.

Angela is the one responsible for coordinating his schedule with the charities they are involved with on top of attending the events to make sure everything runs smoothly. It isn't always easy taking this role Angela said.

"I sometimes need to be that person who tells Carey he has to leave so he can make it to the next charity function on time." You can imagine that doesn't always go over well.

For Angela helping the community is something that comes naturally to her, growing up her family would often donate gift baskets to the less fortunate and at Christmas time she would pick out a toy to give to a child in need. When she first moved to Montreal in 2009 she was inspired by the commitment of Harvest Gionta the wife of former Habs captain Brian Gionta.

"She has three kids and was always able to find the time to make it to every fundraiser" Angela explained. The young couple like to work with charities they have a personal connection to, like with Price taking on the role of Ambassador to First Nations kids through the Breakfast Club of Canada. This initiative has produced over 10,000 meals to children in his hometown of Anahim Lake, BC. The Carson Kolzig Foundation that helps families affected by autism is another charity they actively lend their support to.

Former NHL goaltender Olaf Kolzig named the foundation after his son who suffers from autism. Their involvement began back when Price was playing junior hockey in Angela's home state of Washington for the Tri City Americans in the WHL. Kolzig is part owner of the Americans.

The Prices are currently thinking about creating a foundation of their own to help out the causes they feel the most passionate about.