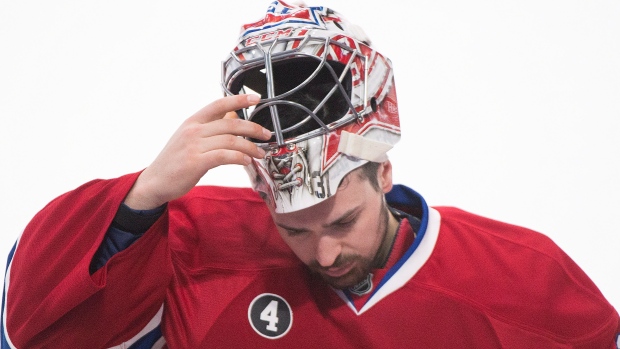 BROSSARD, Que. -- It will be up to backup Mike Condon to hold the fort in the Montreal Canadiens' net for at least another week.

Coach Michel Therrien announced Tuesday that star goalie Carey Price will not play this week, although his lower-body injury is not expected to keep him out for the long term.

Condon will make a sixth consecutive start when the Canadiens, with dads in tow for their annual fathers and sons trip, visit the Pittsburgh Penguins on Wednesday night. Since Price last played in a 4-3 loss in Edmonton on Oct. 29, Condon has gone 4-0-1 and allowed only eight goals.

"I don't think about it too much," said the 25-year-old rookie from the Boston area. "Obviously, Carey is the best goalie in the world and it's tough that he's out right now, but it's the backup's job to be ready when the opportunity comes."

Condon has actually posted slightly better numbers than Price this season. Price is 7-2-0 with a 2.01 goals-against average and .936 save percentage while Condon is 6-0-1 with a 1.57 GAA and .940 save percentage.

"(Condon is) taking his first steps in the NHL and he got an opportunity to play more than he probably expected with the injury to Price," said Therrien. "He responded the right way. He's taking the good approach of playing one game at a time."

Therrien said Price sought a second opinion on his injury from a doctor in New York on Monday and got the same diagnosis team doctors had given him.

"He was worried a bit," said Therrien. "The good news is it's the same thing as our doctor (diagnosed) in Montreal.

"It's good for him, mentally. There's no worry. He's not going to play this week. We hope he'll be able to get on the ice pretty soon, so this is good news."

Meanwhile, Condon's impressive performance has put the lie to the notion that the Canadiens would be a mediocre team without Price.

"This is an opportunity for Condon to show what he's made of and he's done that so far. And it's a bit of motivation for us to open up some eyes."

The six-foot-two Condon seemed to come out of nowhere.

He played four years at Princeton University and spent a season with Wheeling in the ECHL before Montreal signed him. He did well in 48 games with the Canadiens' AHL affiliate last season, going 23-19-6 with a 2.44 GAA, but little to hint at the start he's had in the NHL.

Then he beat out Dustin Tokarski for the backup job in camp and kept it going into the regular season.

"No one knew about Condo before and everyone knows about him now," said Pacioretty.

He still has a long way to go to catch Patrick Lalime's record 16 games without a loss (14-0-2) to start his NHL career with the Penguins in 1996-'97. But Condon only thinks of the next game he has to play.

And he said he isn't getting tired yet.

"In Wheeling, we played four games in five nights, so this is almost like a rest."

Even though he can't play, Price made the flight to Pittsburgh with his father. Condon's dad will see him play an NHL game for the first time.