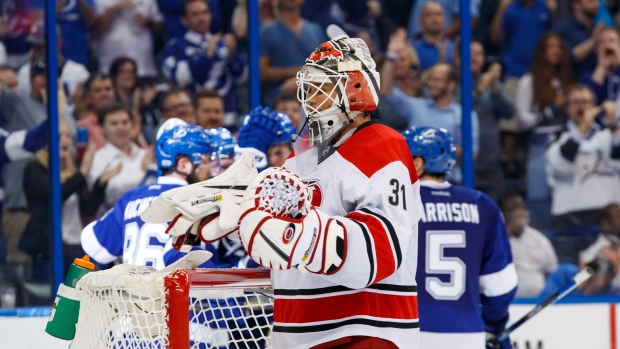 Carolina Hurricanes coach Bill Peters pulled no punches on Friday when it came to his goaltending situation.

When asked if the remainder of the schedule would be an open competition for time in net between Cam Ward and Eddie Lack, Peters vehemently disagreed and gave a scathing assessment of Lack's play.

"You've gotta push," Peters said, ahead of his team's home-and-home series with the Arizona Coyotes. "The one guy's played 10 games. Eddie's played 10 games and was poor in his last outing, let's not kid ourselves, right?"

Lack last featured in the Hurricanes' 4-3 overtime loss to the Tampa Bay Lightning on Wednesday where he struggled.

"There were 16 shots and four went in," Peters continued. "Not good enough. You look at his numbers in the league and they're not good enough. So I don't think it's much of a competition. I think we've got a guy who's well ahead of the other guy. That's what I see and the numbers back that up."

"When he gets in again, he better play," Peters said. "You better earn some respect from your teammates. Your teammates are out there working their bag off, you better get some saves. And a timely save at the right time wouldn't hurt."

Peters acknowledged that his comments were a "little bit honest," but defensible.

"I just looked it up," Peters said. "You look up any goalie who's played 10 games [this season] in the National Hockey League in the top 60 in save percentage, you know who is 60. There are 30 teams. Not good enough."

The NHL league average save percentage is .913. Among goalies who have played at least nine games this season, Lack is 60th of 60.

The Hurricanes are 25-25-10, last in the Metropolitan Division and second to last in the Eastern Conference. They sit 10 points adrift of the New York Islanders for the final wild-card spot.