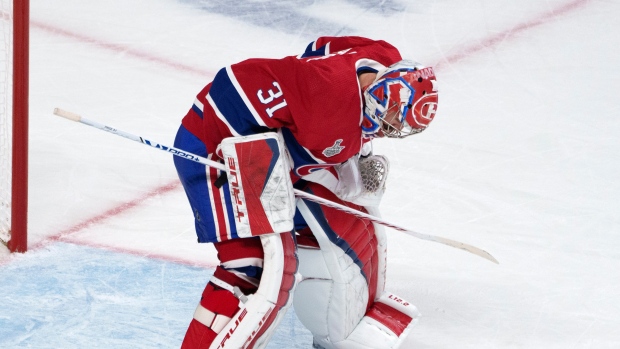 If there are changes for the Montreal Canadiens in Game 4 of the Stanley Cup Final, Carey Price will not be one of them.

Despite Price allowing 13 combined goals through the first three games of the series, head coach Dominique Ducharme is sticking with the 2014-15 Vezina Trophy winner Monday night.

“Carey's the guy playing on Monday. If people wonder who'll be in net, Carey will be in net. You can talk about one guy but it's about all of us. We have to be better in front of him," Ducharme told reporters Saturday.

"It's too early to tell if changes will be made but we're looking at every situation," he said of other potential lineup decisions.

Montreal fell 6-3 to the Tampa Bay Lightning Friday night to go down 3-0 in the series with Price allowing five goals on 29 shots.

“I can definitely play better. It’s just not good enough so far," Price said after the loss.

Coming into the Cup Final, Price had a goals-against average of 2.02 and a save percentage of .934 while starting all 17 of Montreal’s games. His GAA for the playoffs now sits at 2.36 and his save percentage has dipped to .921.

Game 4 will go Monday night from Montreal as the Habs look to stay alive while the Bolts aim to win their second straight Stanley Cup.