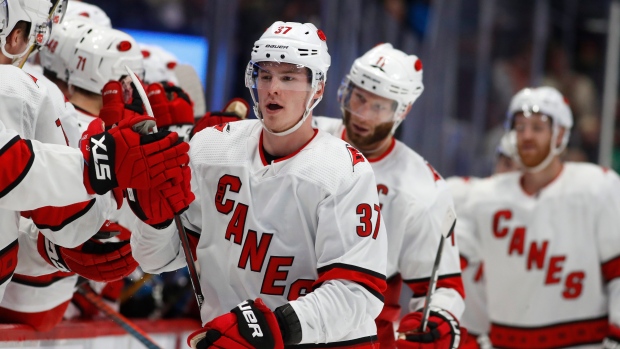 The Carolina Hurricanes have agreed to terms with forward Andrei Svechnikov on an eight-year contract, which is set to keep the No. 2 overall draft pick from 2018 with the franchise through the 2028-29 season.

The team said Thursday the deal will pay the 21-year-old Svechnikov an average annual value of $7.75 million per season. The team has scheduled an online news conference for Svechnikov with team president and general manager Don Waddell for Thursday afternoon.

The 6-foot-2, 195-pound Svechnikov has been a fixture and physical presence on Carolina’s top line alongside Sebastian Aho and Teuvo Teravainen.

He was a restricted free agent and the team had long been in extension talks with him, though Waddell had floated the possibility of a shorter-term “bridge” type deal to ensure getting something done if a long-term deal couldn’t be reached.

Svechnikov’s arrival has coincided with the team ending a nine-season playoff drought and reaching the postseason for three straight years.

The previous year, he posted the first postseason hat trick in franchise history against the New York Rangers in a Stanley Cup qualifier series in the Toronto bubble following the NHL’s restart amid the COVID-19 pandemic.