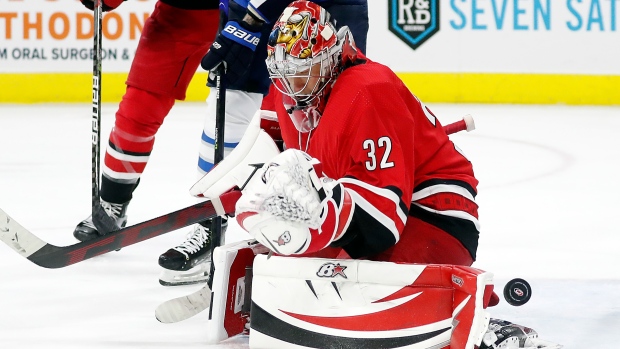 RALEIGH, N.C. (AP) — Carolina goalie Antti Raanta left the Hurricanes' playoff game against the Boston Bruins in the first period Wednesday night after David Pastrnak struck him in the head with a gloved hand.

Raanta was playing the puck when Pastrnak skated in and hit Raanta in the helmet with his right glove as he went by. Raanta went down with blood coming from near his nose or mouth after the play in Game 2.

Raanta was helped off and replaced by rookie Pyotr Kochetkov at the 7:47 mark. He had 35 saves in the 5-1 win in Game 1 after earning his first playoff start while No. 1 goaltender Frederik Andersen is out with a lower-body injury from late in the regular season.

Pastrnak was originally called for a 5-minute major, though that was changed to a 2-minute goaltender interference call to the loud boos from the Carolina crowd.

Raanta's exit came a day after Pittsburgh's Louis Domingue came on in relief of starter Casey DeSmith due to a lower-body injury in the middle of the second overtime against the New York Rangers. Domingue turned away all 17 shots he faced in a triple-OT victory.