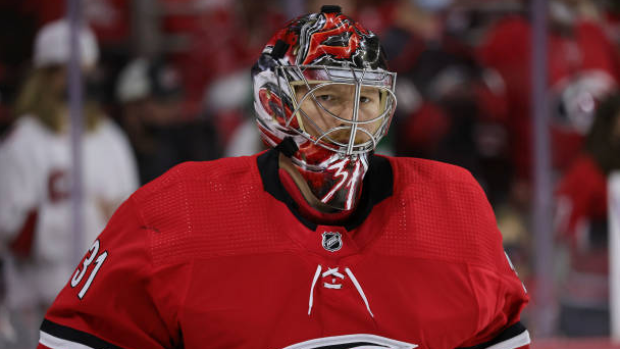 Frederik Andersen is expected to start against his former team, the Toronto Maple Leafs, on Monday night.

Andersen is 4-0-0 to start his first season with Carolina, posting a .944 save percentage and a 1.75 goals-against average.

He’s 4-0-0 with a .944 save percentage this season pic.twitter.com/lnzdYWx7yi

Goaltender Petr Mrazek took part in the team's morning skate Monday as he continues to recover from a groin injury.

The former Hurricane is not expected to play Monday as Jack Campbell worked in the away net.

Thursday will be two-week mark since groin injury pic.twitter.com/rvSdZLIzSU

The Maple Leafs shuffled their forward lines during Monday's skate, putting Auston Matthews between Michael Bunting and William Nylander, and moving Mitch Marner to a line with John Tavares.

Jacob Markstom is expected to start in net against the New York Rangers as the team used the following lines in their morning skate:

Both players were placed in the COVID protocol last week. The Jets will play the Anaheim Ducks in California on Tuesday.

No Scheifele (or Wheeler) for #NHLJets final practice before heading out to California for their next 3 games. #TSN #NHL @TSN_Edge

Murray was placed on injured reserve Sunday with a head and neck injury.

Smith - Matt Murray isn't as bad as we thought it might be. He is going to come on the road trip and may be back sooner than expected.

Anton Forsberg will start as the Senators face the Washington Capitals on Monday night.

Sidney Crosby joined the Penguins for practice on Monday after doing a skills session on his own earlier. Crosby is still working towards his season debut after off-season wrist surgery.

Sidney Crosby (wrist) is taking part in Penguins practice at UPMC Lemieux Sports Complex after working on his own beforehand.

Max Domi skated with the Blue Jackets Monday morning, but did not take line rushes ahead of their game against the Dallas Stars.

So perhaps Gabriel Carlsson goes in. Domi practicing but appears to still be out.