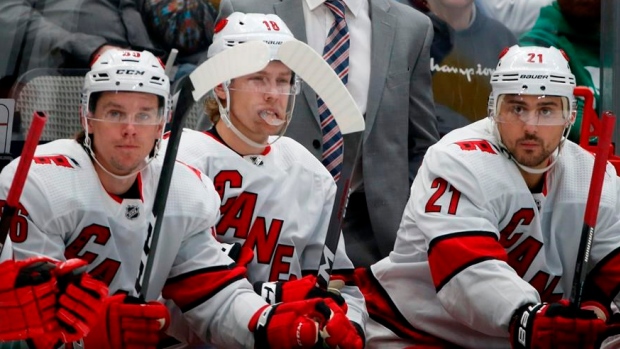 Brind’Amour said it was unclear exactly how much time the players will miss. Reimer left with a lower-body injury, while Brind’Amour said Mrazek is dealing with a concussion and Pesce has a shoulder injury.

“Obviously nobody’s, I would say, short term,” Brind’Amour said. “Longer term for, really, all of them. That’s about all I can tell you.”

Later Monday, team president and general manager Don Waddell said the team has moved Pesce to the long-term injured reserve — aiding the team with salary-cap moves — but that he didn't think the goaltenders would be out "long term.” He also said Mrazek is going through the concussion protocol and has “more of a neck injury," though he hasn't had a headache.

“It's weeks at the most,” Waddell said of the goaltenders. “Petr might be less than that.”

The injuries to Reimer and Mrazek forced the Hurricanes to turn to 42-year-old emergency goaltender David Ayres in the 6-3 win.

The Hurricanes have since recalled goaltenders Anton Forsberg and Alex Nedeljkovic from Charlotte of the American Hockey League ahead of Tuesday's home game against Dallas.

As for Pesce, Brind’Amour said the 25-year-old defenceman was scheduled to be evaluated again later Monday. But any extended absence would be another hit for a team that lost All-Star defenceman Dougie Hamilton indefinitely to a broken left leg in January and is jostling for position in the Eastern Conference playoff wild-card chase.

The Hurricanes acquired centre Vincent Trocheck from Florida ahead of the NHL’s trade deadline Monday afternoon, parting with forwards Erik Haula and Lucas Wallmark along with a pair of prospects. They also added defencemen Sami Vatanen from New Jersey and Brady Skjei from the New York Rangers, with Waddell saying the Skjei deal parts with what will be the lower of Carolina's two first-round picks.